It’s neither bird nor plane. Baby Boomers, it’s not Underdog. Millennials, it’s not a drone. It is a boomerang. Dating back to Prehistoric times, these devices have served many purposes including musical instrument, fire starter, recreational object, and weapon. Mechanically, a flying boomerang behaves according to Newton’s third law of motion: for every action, there is an equal and opposite reaction. Additionally, a boomerang serves as a useful metaphor. The focus of this note will be two boomerangs impacting the financial markets today, one originating a decade ago, the other more recently, and their relationship.

Launching the Original Boomerang: 12 Years Ago

In February of 2007, Freddie Mac, the quasi-government agency tasked with buying mortgages from banks, announced its intention to stop the purchase of “subprime” mortgages - those originating from the weakest borrowers with the lowest credit ratings. (1) Two months later New Century Financial, the largest independent U.S. provider of subprime mortgages, declared bankruptcy. “We are only at the very beginning of the problems facing subprime,” said Sanford C. Bernstein & Co. analyst Brad Hintz. “This liquidity crisis is continuing.” (2)

This was very insightful in retrospect, considering that both the stock and bond markets were relatively calm and stable through the middle of 2007.

Fast forward to October 9, 2007 when the S&P, starting to grasp the potential scope of the financial contagion, commenced an ugly 17-month plunge that would chop its value in half. Problem mortgages spilled into housing and eventually the banking industry. Lehman, Bear Stearns and Washington Mutual were but a few examples of the failures. Quarterly changes in Real Gross Domestic Product (the measure of all economic output) have been tracked since the first quarter of 1947. Of the 287 quarterly changes, only 41, or 14% were negative. Of the 41, five occurred in 2008 or 2009. It was both the longest and deepest of all economic downturns since the Great Depression. (3) Unemployment reached 9.3%. (4) The economic malaise would spread globally.

But this is all in the rear-view mirror, right? Sort of. The depth and breadth of damage to the global financial system resulted in the launching of several distinct boomerangs including:

Monetary Policy: On October 3, 2008 President Bush signed the Troubled Asset Relief Program (TARP) into law, providing $426 billion to shore up banks, automobile manufacturers and mortgages and to throw a “lifeline to AIG”. (5) It wasn’t enough. The Federal Reserve Board had to deploy unprecedented tactics that included taking the Fed Funds Rate to zero, and directly purchasing assets (primarily mortgages) for their balance sheet.

The chart below shows the growing nature of the Fed’s balance sheet since 2008. (6)

The Fed actions translated into historic low interest rates. Investors, unable to achieve acceptable returns from fixed income investments were pushed into both stocks and real estate (further aided by cheap debt). Corporations, still apprehensive about committing capital expenditures, used cheap borrowing to buy back company shares. Low interest rates were to the 12-year run in the stock market, as spinach was to Popeye.

Inflation Knock Out: Skilled cheap labor, which became plentiful in China, Southeast Asia and South America, cheap capital from low interest rates, lower energy prices from fracking, advances in robotics technology, and the transparency of pricing made available via the internet all helped to keep inflation down. The Great Recession dramatically reduced the global demand for goods. Low inflation has been critical in allowing the Fed to keep interest rates well below “normal” – historically the 10-Year Treasury note has yielded 2% more than inflation vs. approximately 0.50% today.

Rebirth of Risk: From 1982 to 1999 the S&P 500 experienced only one negative year; -3% in 1990. Even the meltdown of the dotcom bubble (March 2000) could have been navigated with basic adherence to asset class diversification. However, 2008 produced broad, deep, well publicized pain. The trauma that investors experienced was tantamount to financial PTSD and helps to explain today’s heightened propensity toward trading.

All of this brings us to the brief period between October of 2018 and the end of March 2019, the “current boomerang”.

Rip Van Winkle, a fictional farmer, accepts the offer of a sip of liquor and then falls asleep for 20 years. (7) Not knowing how long he slept, Rip awakens, initially unaware of how much had changed. Had he slept through our recent financial cycle, Van Winkle might also have assumed no significant changes. Let’s see why.

Outbound: Everything turned negative in the fall of 2018. Like actions of an aggressive army, attacks on the financial markets came on two fronts. Flashing indicators of a slowing economy appeared first, including rising housing inventories, slowing in China and a nearly inverted yield curve. The possibility of a recession, anathema to all equity markets, started “trending”. At the same time, the Fed’s determination to “normalize” monetary policy resulted in a spike in short-term borrowing costs. (8) These forces were exacerbated by the deterioration of global trade through political channels. All of this unfolds when, as we emphasized in our January report, stocks were trading at 18 times earnings.

Super low interest rates fueled the 12-year bull market in stocks. With rates rising and the economy slowing, the twitchy hands had all they needed to sell fast and… ask questions later.

Put it all in the blender and you get a particularly nasty period of the stock market between October 3rd and December 24th. The S&P 500 came within a whisker of a bear market (20% down) while small and foreign stocks did even worse.

Inbound: Negative momentum in the stock market created an uncomfortable environment for investing. It did not feel good to be in the market at the end of 2018.

You have tasked us with being your financial adviser and that mandate covers a wide umbrella of all things financial, but perhaps none more important than our responsibility to serve as a firewall between emotions and actions.

Channeling our best Paul Harvey, “Now, the rest of the story”. We countered the prevailing sense of doom with the following facts:

The chart below captures the boomerang. Stocks (yellow) and bonds (blue) move in opposing directions through both ends of the boomerang.(9) 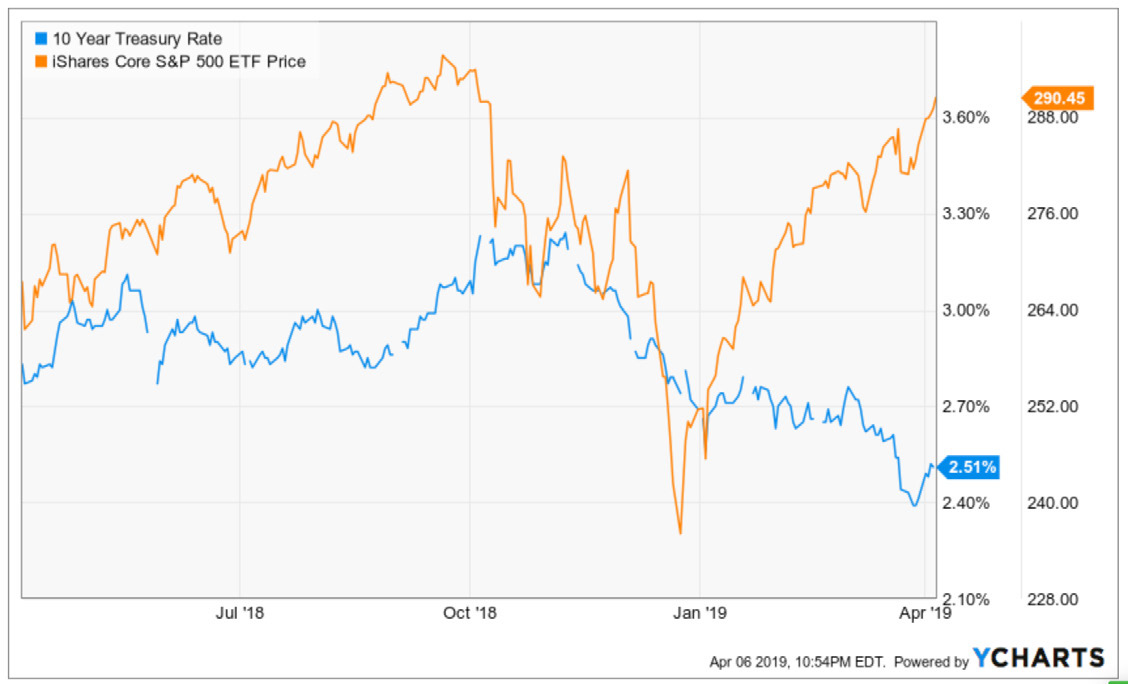 The Federal Reserve, at their regularly scheduled meeting in January, “Left interest rates unchanged, and suggested that it would be flexible on its balance sheet strategy. Interest rates fell and stocks went flying after the Fed’s post meeting statement gave the market just about everything it wanted.” (10)

Two weeks later the White House issued optimistic reports about trade talks with China. (11) Two problems at the end of 2018, two changes in early 2019. Interest rates are modestly lower today than in October and stocks are within shouting distance of their October highs. Problems solved, markets assuaged, boomerang journey complete. The boomerang has cycled back.

If this looks familiar, it should. The stock market had a tizzy fit in year-end 2018 causing the Fed to go soft. The long cycle, consisting of low interest rates and higher stock valuations, lives on. At least for now.

Michael Lewis, author of The Big Short about the 2008 financial crisis did a fascinating follow-up called, of all things, Boomerang. He poses the question “What do you tell your mother when she asks you where to put her money? Then flippantly answers with “guns and gold”. (12)