She was 21 years old and pregnant, when backup singer Merry Clayton received a late-night phone call from her agent back in 1969, asking if Merry could come down to the recording studio.  The agent responds to Clayton’s protests by exclaiming, “Merry, this is for the Rolling Stones”. (1)

Recent market volatility stems partially from trade news being “just a tweet away” and investors have reacted by seeking shelter. Thematically, we honor the 50th anniversary of “Gimme Shelter”.

Mick Jagger uses this direct line in Gimme Shelter to portray pervasive agitation. We reference it as a metaphor to examine the status of the stock bull market.

Despite a few “moments” along the way, the S&P 500 has thundered up for the past 10 years. However, the past 12 months, as evidenced in the chart below, offered a wild ride with barely a 2% return. That could have been achieved with a Treasury Note, (2) with a smoother ride. 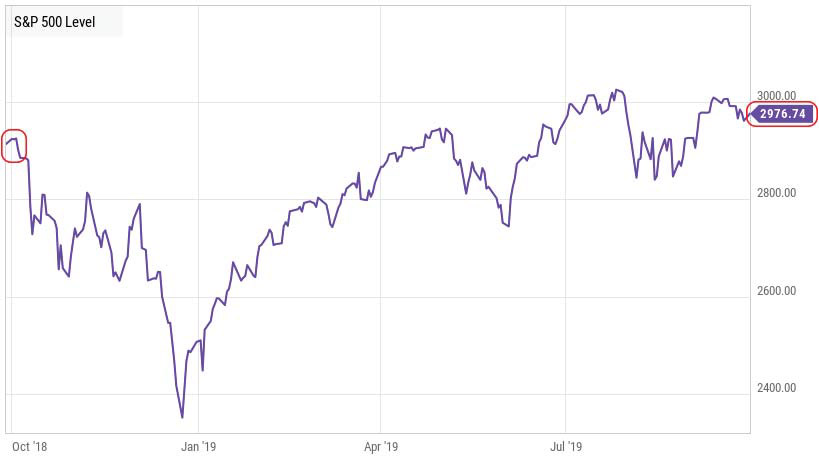 An Asian military conﬂ ict led to street violence in the 1960s. Fifty years later, a new Asian conﬂict – a trade war with China – has led to (Wall) Street violence of a different sort. The stock market has been buffeted by aggressive monetary policy and the treacherous crosscurrents of tariffs and trade issues.

The needle-moving news tends to center around the escalating trade war. (3) We want to be perfectly clear on this issue. China has taken advantage of the U.S. economically and that needs to be addressed. However, the lens we are using here is based upon economics, not politics. 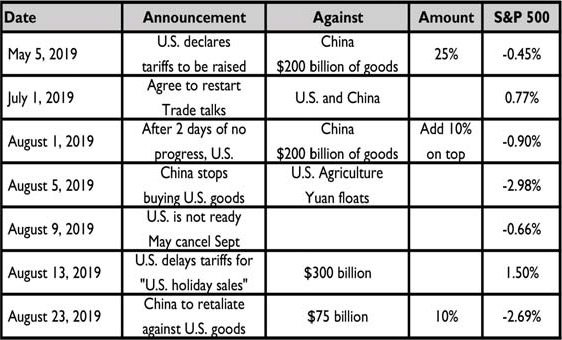 Our originally sanguine view toward trade tensions with China was rooted in these observations:

Say so long to complacency. Neither the U.S. nor China, despite the conﬂ ict approaching 22 months in duration, shows any sign of backing down. Initial impacts of the tariffs included higher prices, especially for steel and aluminum and disruption of supplies. Many products “Made in America” are full of foreign parts. Lack of resolution has led to heightened uncertainty and the delay or cancellation of large capital projects. The Purchasing Manager’s Index (PMI) is a scorecard for manufacturing activity in the U.S. Any reading above 50 suggests economic expansion. The September report came in at 47.8, the second consecutive reading below 50, and the lowest reading since 2009. (5) Together with the inverted yield curve and the rapid ﬂight to the safety of Treasury Bonds, the economy ﬂashes plenty of warning signs.

Trade wars, as it turns out, aren’t good for anyone nor are they easy to win. The Rolling Stone’s album that includes Gimme Shelter is titled Let it Bleed. Unfortunately, that is exactly what is happening with the trade war…it is bleeding into the fundamentals of the economy.

The stock market acts like a buoy bobbing and weaving in the economic waves, but refusing to go underwater. Every time the economy sputters, the Fed comes to the rescue with lower interest rates. Consider the 2-Year Treasury yield, a good barometer of monetary policy. At the beginning of 2019 the yield was 2.5%, but by the end of the 3rd quarter, it was slashed all the way down to 1.6% (6) 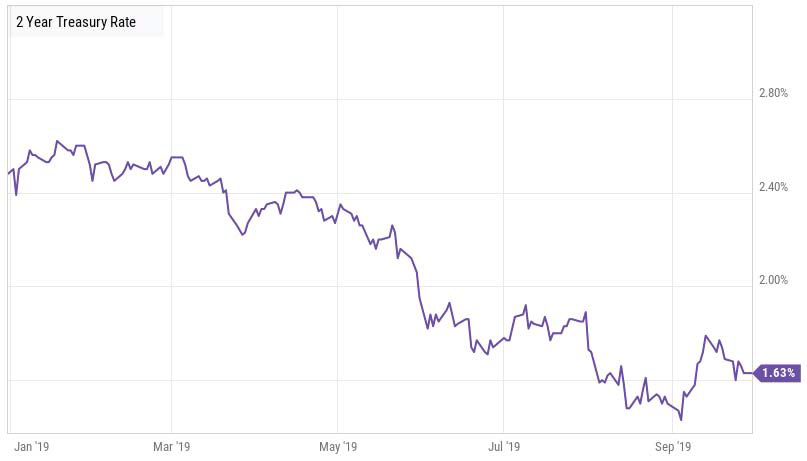 We do not see lower rates being a harbinger of increased borrowing, because they are extremely low already. However, they do serve a purpose in assuring the ﬁnancial markets that the monetary authority is paying attention, and it renders bonds as a less attractive alternative to stocks.

First, all the economic signals discussed above portend changing probabilities, not certainties. The Federal Reserve Board assigns a 38% probability for recession in the coming year. (7) Although that ﬁgure has risen steadily through 2019, it also suggests a 62% probability of avoidance. Unemployment, one of the positive indicators noted above, just reached the lowest level (3.5%) since…you guessed it, 1969. (8) A recession will eventually arrive, but it might not be any time soon.

We have a long-standing strategy of not placing bets on a binomial outcome that results in either winning or losing. Instead, we design your portfolio to withstand volatility. Structurally, we always maintain some cash in your account and that serves as dry powder for buying stocks should they go on sale. Your bonds remain at the absolute top of the quality chain, with little or no exposure to credit risk. Current yields are unexciting, but bonds will retain their value in the face of any recession. About one year ago we added a fund that provides exposure to Low Volatility stocks. This “defensive” strategy has far outpaced the overall market during this year. Your stocks are diversiﬁ ed across sectors, sizes and geographies. We have and will continue to focus on those companies with strong balance sheets, those most capable of enduring rough economic times. We have been willing to hold some of our most defensive names (utility stocks) despite higher than normal valuation, to retain those defensive characteristics. However, we still own unloved industrial stocks that appear cheap and stand to rebound the strongest if the economy avoids recession.

The Rolling Stones expressed the gravity of their perceptions in 1969:

Oh, a storm is threat’ning
My very life today
If I don’t get some shelter
Oh yeah, I’m gonna fade away

We see the clouds on the horizon and understand the potential for rain. That’s why we build strong shelter, to keep the storms at bay. “Fading away” is not an option.