“He didn’t want me to reject it out of hand, which I might have done, because it was a crazy idea. But when I tasted it, I was sold.”
- Ray Kroc, on his introduction to the Egg McMufﬁn. (1)

To this illustrious list we would like to nominate the Stew, made on Wall St. in 2019. Technically, stew is a type of food consisting of meat or ﬁsh and vegetables, cooked slowly in a small amount of liquid. It’s a great metaphor for how we see the stock market, with its performance a mix of economic growth and earnings (protein and veggies) and interest rates (the liquids).

How Good was the Stew?

Was it the Meat?

One would be hard pressed to make the argument that the strong equity market performance was driven by the economy or earnings. GDP, the measure of all economic activity, expanded by approximately 2% in each of the past two quarters, a yawner by historical standards. (2)

Corporate earnings were ﬂat in 2019, with virtually no growth. (3)

Or Perhaps the Cooking Method?

The 2019 vintage, as it turns out, wasn’t so much the meat, the ﬁsh or the vegetables. Instead, these stews owe their success to their slow braising in liquid.

Slow: Pulling out of the severe recession in 2008 required Herculean efforts on behalf of the monetary authorities around the globe. Academic economists believed that the price of the recovery would be a sustained period of sub-par economic growth. (4) We have highlighted, in the chart below, the muted nature of the economy since 2008. (5) 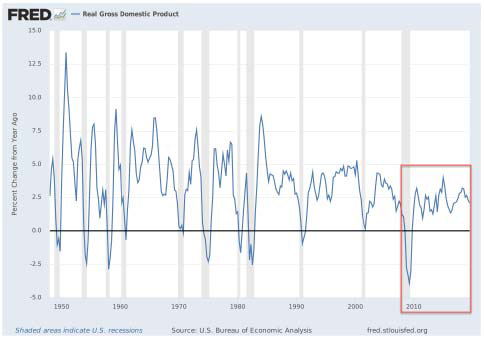 No economic overheating occurred during this period of economic simmer, featuring slow but steady growth. Therefore, inﬂation has remained mild, allowing the cycle to continue uninterrupted, tantamount to using a crockpot.

Why the low inﬂation? Consider the core costs of running any business: labor, capital and energy. The chart below shows that real wages have gone up by less than 1% per year since 2009. (6) 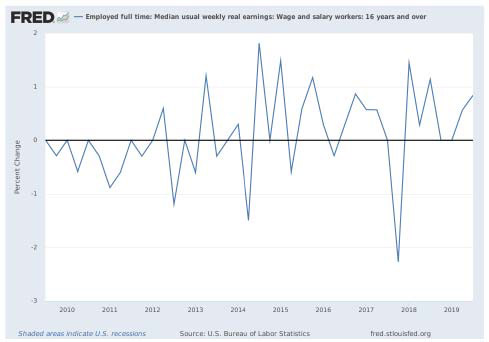 Both a glut of skilled labor (think globalization) and industrial automation (think robots) serve to keep a lid on wage growth. Monetary policy drives the cost of capital and interest rates remain near historical lows. Finally, it requires energy to both manufacture and transport goods. Relative to the $140 peak price reached in the summer of 2008, today’s $65 per barrel of oil represents a bargain. (7) Steady growth absent inﬂation allows the Fed to continue with easy money policies. Thus, we have now gone 11 years without a recession.

Liquid(ity): Recessionary concerns reemerged in the fall of 2018 when the yield curve inverted, and the heat turned up on the trade war. The S&P 500 dropped nearly 20% (the deﬁnition of a bear market) in the 4th quarter of 2018. Three consecutive interest rate cuts in 2019, engineered by the Federal Reserve, created the perfect simmer – more liquids. The 10-Year Treasury yield, as seen in the graph below, dropped nearly 50% from the peak of 2.80% to the trough of 1.55% during the year. (8) 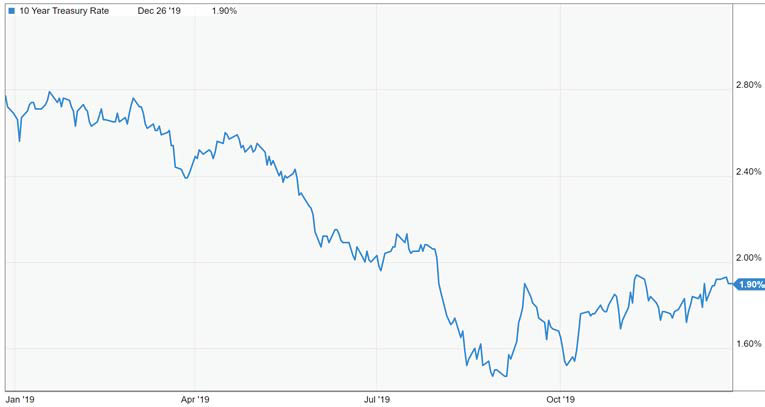 How is it possible that subdued economic growth, along with stalled earnings in 2019, produced such a sweetened year for the equity markets? The S&P 500 started 2019 at 2507, or 15 times the 2018 earnings of about $162. Mathematics suggests, with the closing price of 3217 on those same frozen earnings that the price to earnings ratio spiked from 15 to almost 20. A delicious year; built on optimism and liquidity instead of meat and veggies.

The new year has two things cooking, so to speak. First, the broth. Plenty of premium liquid stemming from persistently low interest rates. Second, momentum; what tasted good last, according to Wall St., tends to look appetizing in the following year. The concept, commonly known as momentum, has some academic support, though it tends to result in exaggerated moves in both up and down markets – like the impact of MSG on food ﬂavoring.

With stocks already trading at a high valuation, the market might echo an old Wendy’s commercial and ask, “Where’s the beef?” Analysts currently look for earnings of $178 on the S&P 500. (9) Coming off the $162 earnings ﬁgure for each of the past two years, that would represent about 10% growth. However, that $178 average comes with considerable range. If the economy produces enough yeast to levitate earnings, stocks could have another decent year.

However, that requires the avoidance of:

Not an easy recipe, but doable. 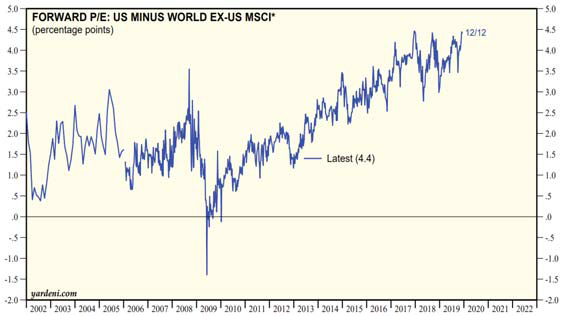 One could argue that all the growth in the world emanates from Silicon Valley, but we like the attractive valuation, the higher yield, and the potential diversiﬁcation afforded by owning foreign securities – a bit of spice.

2019 brought a ﬁne stew based on slow cooking and ample liquids. That tasty dish might be tough to replicate in 2020, but we can lean on the sage advice of one of the real pros. Wolfgang Puck once said, “Cooking is like painting or writing a song. Just as there are only so many notes or colors, there are only so many ﬂavors – it’s how you combine them that sets you apart.” (13)