In the 2004 spoof “Dodgeball”, a group of misfits are coached by Patches O’Houlihan who emphasizes the five D’s of Dodgeball: dodge, duck, dip, dive, and dodge (yes, twice). That somehow also applies to income tax planning, which might add “deferral” as the 6th D.

Wimpy, the cartoon character from “Popeye”, probably didn’t think up the idea of deferral; but he helped popularize it by chanting, “I would gladly pay you Tuesday, for a hamburger today”. Why not pay later for a benefit today? After all, delaying cash outlays provides a window of opportunity to earn the money first.

Wimpy might have deployed labor, but the concept applies to capital. Let your money work and grow before paying the bill. With rates of approximately 5% per year over the past 50 years, this presented an opportunity for “easy money” by investing in 1-Year Treasury notes.

Deferral frequently led to lower rates as seen in the chart below. The top tax rate on ordinary income, 90% in 1954, has moved mostly downward. Capital gains rates, 40% in the 1970’s, are generally 15-20% today. The “no brainer” strategy of tax deferral offered the dual enticement of earning easy money along with the possibility/probability of lower future rates. 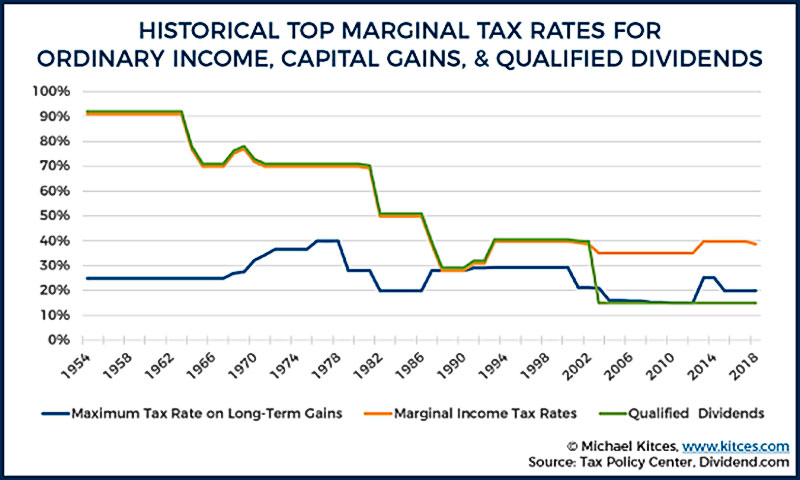 Thus, the mantra of always defer taxes. Does this generalization hold true in 2020?

Not necessarily. Both the drivers—risk-free returns and lower rates—seem to be moving in the wrong direction. Tax rates will probably head higher, regardless of election results, to cover the cost of the Covid-19 pandemic. In addition, those easy 5-6% returns in Treasury notes have disintegrated into 0.14% as of July 27, 2020.

It may seem counter-intuitive, but this might be the year to recognize income. Of course, each individual situation is unique and personal, but consideration might be given to the following:

Income tax deferral may still make sense today if any of the following apply:

2020 “might” be the year to not defer, dodge, or duck, but allow the ball to hit you. It’s a great opportunity to discuss with your CPA and your financial adviser this fall.