“A man can be destroyed, but not defeated."
—The Old Man and the Sea; Ernest Hemingway; 1952

Man, versus man, nature, society, or self.1 These represent the classic points of conflict in literature. The Old Man and the Sea, perhaps the greatest example of man against nature, tells the story of Santiago, an elderly Cuban fisherman who has hit a rough patch. He has endured 84 consecutive days without a catch. The modern incarnation of this story is playing out on a global stage, with humans against nature; manifest in the form of Covid-19, the antagonist. It has now been 184 days since Dr. Fauci warned us that, “You don’t make the timeline; the virus makes the timeline.”2

Santiago leaves his village each day on a quest for fish. Imagine that he is in a slow boat that has a small leak. He could switch to a faster vessel, but he is concerned that it might not hold up well when the waves get big and he doesn’t have the stomach for a rough ride. We would consider his current experience tantamount to a pure bond investor today, accepting the paltry .66% yield available on a 10-Year Treasury Note, even though that is less than inflation. No problem because one avoids those big waves, right? In time the bond investor, while avoiding the wreck, is guaranteed to have diminished purchasing power. The slow leak will eventually sink the ship. It just doesn’t happen suddenly.

Because our fisherman, Santiago, went without catching a fish for 84 days, the village sees him as “salao” or, one with exceptionally bad luck. In fact, the parents of his young apprentice, Manolin, forbid him from continuing to fish with Santiago. Desperate to end the skid and restore his reputation, Santiago tells Manolin that the following day he will go beyond his normal fishing range north of Cuba and into the Gulf Stream.

In the Covid world, Santiago can no longer take the slow boat with a leak. He sees the inevitable deterioration of his well-being and musters up the courage to accept risk. He is moving from bonds to stocks.

As we know, Santiago goes out far and goes big, catching what he believes to be a huge marlin.

We have long favored and use the S&P index for one simple reason; inclusion requires earnings. The Russell 2000 is chock-full of companies losing money. The group that includes the losers is down 9.59% year to date. The group that requires earnings…down 16.24% year to date.3 Translation: investors, eager for greater returns in a low interest world (just as desperate as Santiago was to catch a big fish), are buying “lottery ticket” stocks.

The vast outperformance of biotechnology stocks over food stocks further supports the thesis of high levels of speculation in the markets.4 While some company may discover the perfect therapy or vaccine for Covid-19, a portion of the biotech industry barely survives from one round of fresh capital to the next.

Then there is the issue of concentration in the S&P 500. To track that index this year would require dedicating 25% of a large cap U.S. portfolio to a mere eight names – almost all involving technology and trading at historically high prices relative to earnings.5 The S&P 500, unlike small or foreign stock market indices, is up modestly for the year. However, absent the top five names, the index would be down 6% for the year.6

Another example of fishing big includes the sudden popularity of the Special Purpose Acquisition Company (SPAC), also known as a “blank check company”. Investors pony up capital for an unknown acquisition that hopefully provides positive results. No revenues, no earnings, no way to value.7

To summarize, it has been a challenge to keep pace with indices this year while maintaining a trace of discipline. It has been almost impossible to track the small cap index without a willingness to buy stocks of companies losing money. Not exactly our ideal fishing trip.

Santiago fights to reel the fish into the boat. However, the Marlin is strong and puts up a furious fight, pulling him for the next two days, leaving Santiago injured and extremely fatigued. Advantage nature.

The stock market staged its own battle off the March 23rd lows because of unprecedented levels of monetary and fiscal stimulus – man neutralizing nature. But fatigue is setting in. Government subsidies under the Cares Act are set to end, and Congress cannot seem to agree upon the details for another round. More than 800,000 new applications were filed for unemployment benefits this past week.8

Nature counter-punched, as seen in the chart below. Covid-19 never really stopped fighting. In September, the markets demonstrated fatigue, coming within a whisker of an official correction, down 9.98%.9

Sharks in the Water

Santiago eventually reels the large fish to his boat and, despite his admiration, ends its life. He begins the long journey home where he can put his changed luck and his fishing prowess on full display. Sadly, we know that sharks interrupt this success story by coming after Santiago’s catch. Although he fends off the first efforts, the blood in the water only attracts more sharks and they eventually consume the entire fish.

The election, valuation, and Covid-19 are the most recent sharks circling around the stock market. The market does not like uncertainty and the Covid-induced, mail-in nature of this election obscures near-term visibility. For those who want to read more about our views on the impact of the election: https://www.wcfinc.com/truth/commentary-and-insights/18-insights/144-election-2020

Valuation can be tricky when accounting for the temporary nature of the slowed economy. Referring to abnormally high price-earnings ratios resulting from depressed earnings, Leuthold Group recently reported that, “Both leading and median stocks for the S&P 500 sport valuations that are in the mid to upper 90’s.” 10 We share the sentiment expressed in their latest report, “Mere mention of valuations increasingly brands us as dinosaurs.” 10

Of course, the 800-pound shark (gorilla) remains the Virus. In the U.S., daily cases dropped as low as 17,500 at the beginning of summer but have been trending up to more than 44,000 in the past seven days.11 Hospitalization rates have stopped falling and test positivity rates are trending up again in New York City.12 The simple reality is that the economy cannot recover until Covid-19 is brought under control. We need safe schools to open to free up working parents. We need confidence to visit public places to climb out of the 8% unemployment ditch.13 GDP estimates were cut in half this week, from 6% growth to 3% growth.14

Though destroyed, Santiago struggles to return to his home. Onshore, he leaves the skeleton of the fish that his peers measure to be 18 feet in length. He has regained the villagers’ respect and the admiration of Manolin. He eventually falls into a deep sleep and dreams of his childhood. Clearly not defeated.

The world has paid a high price for Covid-19 in terms of both lives and economics. However, humanity has not rolled over, especially in the areas of economic support, medicine, and science. The chart below shows the level of fiscal stimulus from each country as a percent of their GDP.15 The black circle represents the level of support in the 2008 crisis and the blue circle Covid. 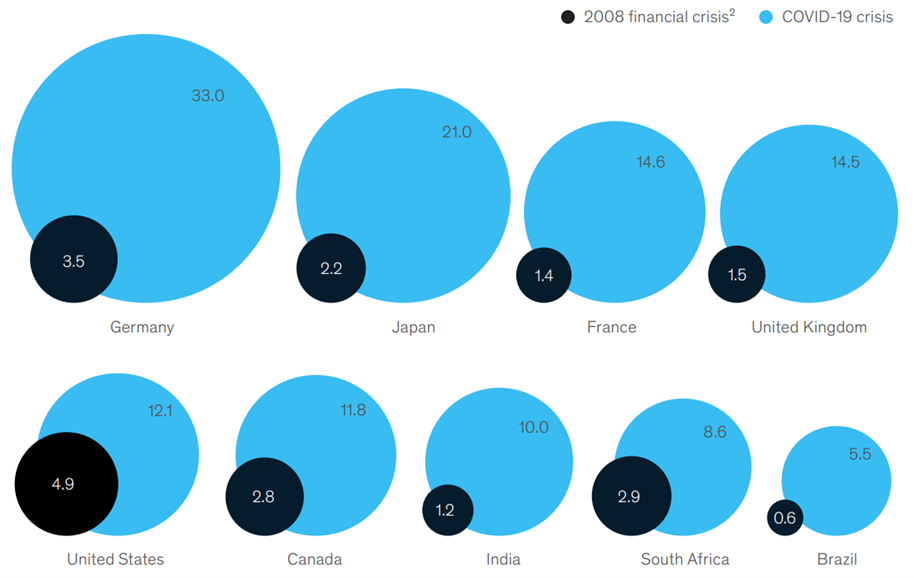 The size of the Federal Reserve Board balance sheet has ballooned to $7 trillion, compared to approximately $2 trillion during the 2008 crisis.16

Doctors have gained insight on how to better treat Covid patients, helping to reduce mortality. Scientists have discovered therapeutic treatments that also save lives. This week, Regeneron Pharmaceuticals, reported an antibody cocktail that reduces both the virus level and the symptoms, and it can be given outside of a hospital setting.17

Santiago reflected on his circumstances and said,

Duly noted. We will avoid focusing on those missing items such as: Covid or the election in the rear-view mirror; bond yields that keep pace with inflation, sufficient employment, or a rational investment landscape.

Instead, we will think of the balance in your portfolio, the nets that have been set in less popular waters, the unused bait at your disposal and the strength of your vessel. We will think of the confidence that stems from having fished in similar conditions in 1999 when investors chased only Marlin, while ignoring the sharks. We will rely on patience and discipline because they were rewarded when fundamentals started mattering again in the spring of 2000. We believe that scientists around the globe working to solve Covid through any combination of therapies and/or vaccines will eventually prevail; that man ultimately wins this battle.