If you wish to make an apple pie from scratch, you must first invent the universe.
—Carl Sagan

Carl Sagan, whose list of accolades is astronomically long, made the above statement about pie back in 1980. Though he was describing something profound about the universe, this insight applies equally well to financial markets: once we start asking ourselves what goes into making something, whether it is an apple pie or a market, we might find ourselves surprised by all the ingredients truly necessary and “baked in.”

This insight can help us understand a wide range of issues from why stock valuations are high despite the economy in shambles post-COVID, to why timing the market based on news is likely a fool’s errand.

What does it mean?

Like a whale-watching trip that guarantees you will see a whale or your money back, watch 10 minutes of CNBC and you are all but guaranteed to hear some version of “that’s baked in.”

This suggests that because some possibility or outcome is expected, market participants have already factored that into the price they are willing to pay for an asset. That piece of information or outcome – that bit of apple – is already baked into the pie.

If an investor believes they know something that is not yet ‘baked into’ the price of an asset, that becomes, in industry jargon, a ‘catalyst.’ For instance, if an investor believes a particular biotech company will receive FDA approval on a new drug, that approval could be a catalyst that causes the stock’s price to increase.

An astute reader might already begin to see one of the trickiest issues of the concept. If “the market” also believes the biotech company will get FDA approval, the stock price may not move, because it was baked in all along! It is almost impossible to ever really know what is baked into a price until after the fact! There is always uncertainty about what the market expects.

How can it help?

If we can’t see directly what is baked in, what does the concept do for us?

Understanding baked in expectations can help us understand why COVID has minimally affected the stock market compared to the economy. The economy is, by definition, what is going on right now. The stock market is a measure of the value of what people will pay for companies right now, but that is based on what they expect from those companies now and in the future. If the market knows that a disruption to the economy is temporary, almost no matter how bad that disruption is, it will look small on a long time-horizon. Check out the inexorable march of the S&P 500 over the past 90 years: 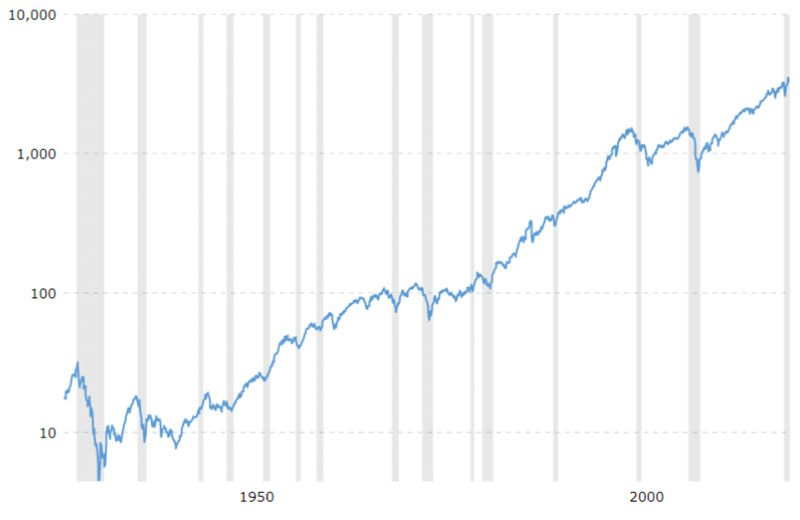 Even when economic conditions are terrible, the baked in assumption that they will get back on track makes these drawdowns look more like blips than crashes.

Protecting us from ourselves

The concept of information being baked into a price is also why it often doesn’t make sense to sell a stock right after a company has had bad news. If one weekend, a company announces major delays with their new product, the herd mentality reaction – a natural one – is to sell as soon as the market opens on Monday. But because everyone finds out that information at the same time, and bakes it into the pie that they use to value that company, the stock doesn’t trade at the same price it closed at on Friday, it immediately trades lower. Even the first investor to sell on Monday gets a worse price than the last one to sell on Friday. Why? The information was baking in all weekend!

Just like we won’t reinvent the universe when we bake our family recipe for pie this Thanksgiving, we don’t need to assume that all information and all outcomes are always properly baked into asset prices.

However, if over the second plate of turkey and stuffing, dear Uncle Joe, crazy Uncle Tony, and tall-tale tellin’ Uncle Glenn are talking about how they found the next bitcoin, you can bet your dessert whatever they are talking about is already baked in like so many cans of pumpkin purée.