In the movie City Slickers, Mitch, played by Billy Crystal, is a softie from New York City who attempts to shake up his mundane life by going on a cattle drive from New Mexico to Colorado.  Mitch and other urban-dwellers are led by a gruff cowboy named Curly, played by Jack Palance.  Up on their horses and alone on the range, Cowboy Curly asks Mitch if he knows the secret to life.  Mitch admits he doesn’t.  Curly raises a single finger and says,  “This.”  Mitch responds incredulously,  “Your finger?”  Curly says no and clarifies that it’s one thing, just one thing.  When Mitch asks what that one thing is, Curly offers the entirety of his cowboy wisdom by saying, “That’s what you gotta figure out.”

On March 23, 2020, the S&P 500 was down 30.5% for the year and fear was pervasive.  In the ensuing 18 months, the stock market has doubled.  However, the just completed third quarter of 2021 exemplified the old Wall Street adage that stock prices in a bull market “climb a wall of worry,” as the weekly headlines below suggest.

August 9th:  “Beware What Lies Beneath Tranquil Markets,” penned by an economic consultant, goes viral.  He cites “seemingly unrelated vibrations” that include the rise of authoritarianism, anti-globalization, a pandemic, climate change, and populism. (6)

August 16th:  Per the media, inflation could become a “perpetual problem” if the Senate passes the $3.5 trillion budget. (7)

August 23rd:  The semiconductor shortage will last longer than expected.  Because they run everything, chips are compared to oil in the 1970s (8)

August 30th:  Fed Chairman Jerome Powell signals that a “taper” is coming.  That is Fed-speak for a smaller balance sheet powered by reduced bond buying.  These would be baby steps toward unwinding the Frankenstein monetary policy put into place during the Great Recession and widely expanded during the pandemic. (9)

By the end of August, the stock market faced a slowing economy, rising inflationary pressures, the specter of a less accommodative Fed, supply constraints, and a stubborn Delta variant.  The market response?  The S&P 500 was up by more than 5% through July and August.  However, the headwinds persisted in September:

September 20th:  Evergrande Group, a Chinese property developer, might default on some of its debt, a not insignificant $300 billion.  To compare, the Lehman Brothers stock peaked at a value of $60 billion and its failure triggered quite a mess in 2008. (12)

Did a Straw Break the Camel’s Back?

Was Curly right about “the one thing”?  Was there one obstacle the market could not overcome, or was it the culmination of three months of relentlessly bad news?

The political theatre over the debt limit should soon pass.  Although the Chinese real estate developer Evergrande is drowning in debt, they are selling assets and can lean on the Chinese government. (15)  The semiconductor shortage will be solved by good old-fashioned capitalism; 20 new factories are coming on-line this year and next. (16) Rising energy prices are a concern, but OPEC has a shaky track record of maintaining permanently higher oil prices. (17)

Inflationary pressures are a more complex story.   Like a dormant campfire that only needed fanning, the Trump trade war with China provided the spark.  Estimates are that “U.S. importers absorbed more than 90% of additional costs resulting from the 20% U.S. tariff on Chinese goods.” (18)  China’s retaliation against U.S. agriculture set off a cycle of stockpiling and disruptions for both countries.

Then Covid hit and consumer demand vanished.  Management responded by halting inventory orders and turning off manufacturing, expecting a prolonged recession.  It didn’t play out that way.  Thanks to aggressive monetary and fiscal policy, not only was the recession short, but a society that had been tilting toward experiences over “things” suddenly lost access to travel, concerts, and brunches.  Aggregate demand for stuff came back with a vengeance and U.S. companies, caught flat-footed, turned to imports as fast as possible, especially from China. Management, in addition to missing the timing of the economic cycle, had been leaning heavily into just-in-time inventory and globalization strategies to control costs and maximize profits.  Though efficient, both strategies require “a fast and efficient network of suppliers.” (19)  “The complex system that moves raw materials and finished products around the globe requires predictability and precision. Both had been lost.” (20)

The results?  Too many cargo containers sitting in the Port of Los Angeles.  Not enough truckers, railway cars, or warehouses.  The predictability and precision required to keep the global economy humming was gone.  Too much uncertainty of demand led to long delays and rising costs.  Wal-Mart has the third largest truck fleet in the U.S. and is offering drivers a $12,000 signing bonus and starting salaries of $87,500. (21)  The cost of getting a shipping container from China to Los Angeles is $20,000 today vs. $2,000 two years ago. (22)

The media’s narrative about inflation has been fed by the supply chain challenges, rising energy prices, a tighter labor market, and a spike in consumption.  Yet, Fed data currently points to inflation of 2.38% going forward, down from a peak of 2.55% in May. (23)  Why?

This leads to the one, really big thing…monetary policy.  The Fed has announced plans to taper their bond buying, and this did seem to spook the markets.  However, Neel Kashkari, President of the Federal Reserve Bank of Minneapolis, recently reiterated the perception that inflation was transitory and that he does not expect to see interest rates increased until 2024. (26)

The Price of Certainty

If inflation stays relatively subdued, as the Fed predicts, then the Fed may gradually liquidate their swollen balance sheet by selling bonds in the open market and stick to the plan of keeping interest rates at benign levels for the next several years.  What makes that key?  Artificially low bond yields make them less attractive compared to stocks.  When bonds fail to keep pace with inflation, investors will be corralled into other investments….and stocks in particular.

On March 23, 2020, investors seeking refuge from the Covid-driven turbulent stock market, could lock in a guaranteed .76% per year return available with a 10-Year U.S. Treasury Note.

Consider the investor lulled into the path of “certainty.” The chart below shows that for every $100 the investor has in the beginning they would only be able to buy $81.72 of goods or services 10 years later (100.00 – 18.28).  Unfortunately, the “sure thing” results in a gradual degradation of purchasing power. 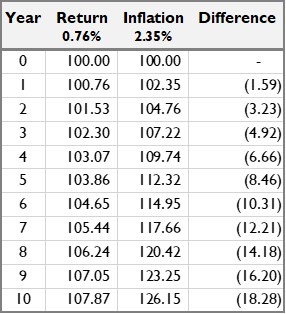 Harnessing the “sureness” of Treasuries would require 92 years of compounding to double a portfolio given a .76% annual yield.  Equity investors, starting the same day, doubled their portfolio in approximately 18 months.  Talk about FOMO.

To achieve those type of returns though, requires embracing volatility, turning a deaf ear to news flow, and accepting sustained periods of negative returns.  The cost of maintaining or improving a standard of living in today’s financial markets is the implicit roller coaster ride that comes with owning equities.

The ascent of the stock market off the Covid lows came with such propulsion that the market never reversed so much as 5% through the end of the third quarter.  A 5% downward movement in the stock market is tantamount to rain in Seattle, highly predictable and hardly newsworthy.  Corrections, technically defined as a 10% decline in the market, have occurred, on average, once every 33 months since World War II, with a typical decline of 13.7%.  These periods can be uncomfortable, but they are part of the package with equity investing.

On the last day of the trip, and after hearing each of his friends’ visions for their lives, Mitch interprets Curly’s “one thing” as being unique to every individual.

The same personalization applies to asset allocation, the proportion of equities in a portfolio.  We have no agenda to herd clients from “one pasture to another” but, are compelled to shine a light on the risks associated with “riskless” investments.