In the 2006 movie Failure to Launch, Sarah Jessica Parker and Matthew McConaughey spoofed Millennials’ (ages 25-40) propensity for extending their stay in their parents’ homes.  Worry not. Millennials are now leaving the nest in droves, creating a surge in the demand for housing. Millennials recently overtook Baby Boomers in population, so their economic influence shouldn’t be underestimated. Demand has been enhanced by the work-from-home movement, historically low interest rates, and the presence of institutional investors buying tracts of houses. Combined, these drivers helped push up the median price of a house in California 17% in the past year.

Instead of handicapping the future of house prices, we want to address the pros and cons of moving quickly to capture still relatively low mortgage rates compared to waiting and hoping for lower prices.

Let’s start with a basic set of assumptions including: $1.0 million price for the house with a 20% down payment and the remainder financed at 5.00% fixed for 30 years. The buyer needs $200,000 for the down payment (we will address strategies in a future article) and must qualify for a $800,000 loan. Assume property tax rates of 1.2% per year. The monthly payment (mortgage plus property taxes) would be $5,295.

Thus, the dilemma. Is it better to jump on the purchase of a house before interest rates increase another 0.25%, or remain patient and hope housing prices drop by $25,000? Of course, supply and demand will ultimately drive price.

Supply:  There is no sign of easing on the supply side. The graph below (LA and Orange County, but presumed to represent California) shows that the construction of new homes collapsed in 2007 and has remained below trendline for the past 15 years, despite 3 million more residents in California.

According to Realtor.com, the number of homes (nationally) listed for sale below $500,000 was 74% lower in February than the same month in 2019.

Demand has opposing forces. Millennials, previously mentioned for their pure demographic power, represented 37% of all buyers in 2020 and 43% in 2021 according to the National Realtor’s Association. Remote work removed the geographic shackles from many employees but increased the need for additional workspace in the home, adding to demand. Ironically, the Affordability Index (comparing prices, interest rates, and income) was the most attractive in 2020 since 2013, according to a recent report in Barron’s.

However, house prices have surged since 2020 and interest rates have spiked since the end of 2021. It is estimated that 87% of all home buyers use mortgages and the table above demonstrates the $875-per-month increase in cost based solely on mortgage rates. It shouldn’t be surprising that “mortgage applications have dropped by more than 10% from the recent peak.” The Affordability Index that attracted buyers in 2020 has swung in the opposite direction. Realtor.com estimates that in Austin, Texas, a red-hot housing market, only 6% of the residents can afford the median-priced house.

Despite the recent hyperbolic price movement in housing, there are certainly periods of time when housing does not do well. The graph below (Federal Reserve Bank of St. Louis) shows the price of California residential real estate starting in 2006, the significant dip through the Great Recession, and failure to reach those 2006 price levels even 10 years later.

Interest rates, on the other hand, seem destined to keep rising. Fed Chair Jerome Powell has articulated a clear intention to raise rates at each of the next several Federal Reserve meetings and a willingness to move in 0.50% increments rather than the 0.25% executed in March 2022.

One caveat: the Fed typically operates with short-term interest rates while mortgage rates are tied more closely to 10-Year Treasury rates. It is possible for the Fed to tighten and mortgage rates to flatten out.

Overall, there is not a clear path to the conclusion that either rates will increase or property prices will fall in the near term.

Other Factors:  The relative cost of renting can be compared to buying the same home. As we saw earlier, a starter home in Southern California —presumed to cost $1 million— carries a monthly cost of $5,295 (assuming the $200,000 down payment can be secured). An informal survey of relators suggests that rents on those same starter homes are approximately $4,000 per month (a figure that varies with geography).

Let’s ignore income tax consequences for this discussion, though an explanation is included in the appendix.

Mortgage payments can be fixed for 30 years. Property taxes (in California) cannot rise annually by more than the rate of inflation, or 2%, whichever is less.  Let’s compare the combined cost to rents. According to a report published by Marcus & Millichap, “Estimates for the first quarter of 2022 show a 16.8% lift in average effective apartment rents in the United States.” If rents rise by 5% going forward, compared to property taxes at 2%, you can see the seeming cost advantage of renting evaporates around year 7. 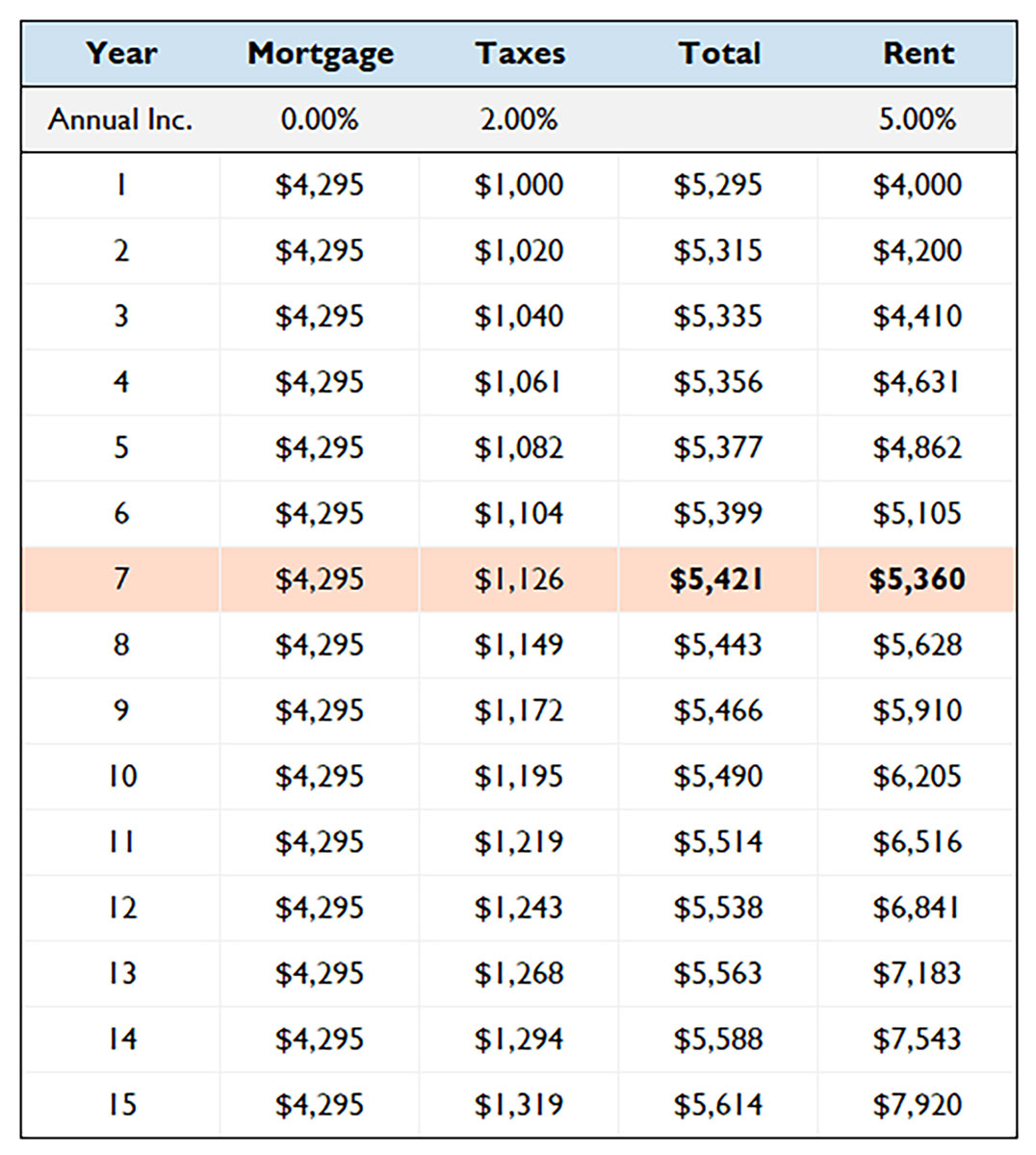 Finally, consider the $200,000 down payment. A broad basket of stocks (large, small, and foreign) has returned approximately 10% per year since 1973. Can that down payment keep pace?

Let’s forgo the conversation of whether stocks can deliver comparable returns at today’s price levels. Instead, let’s see what happens to a down payment when leveraged (including the use of financing).

If the house appreciates by the rate of inflation (current long-term assumption is approximately 3%), then you can see the expected value of the house after each year in the chart below. Assume it costs 7% between commissions and other closing costs to sell a house. Each year you make your mortgage payments, some portion goes to interest and some to reducing the balance of the loan. The sale of the property in the first couple of years, even with some appreciation, would generate a loss. However, the economic gains compound over time. By way of example, assume a sale at the end of year 10. The property is projected to increase in value to $1,343,916. The gain on your $200,000 investment (Return on Equity; ROE) would be $356,099 or, approximately 10.8% annualized. Of course, the actual price performance can vary significantly, especially over brief time periods.

The Excess Monthly Payment column in the table above is the cumulative difference between the expected cost to rent and the buying cost (mortgage plus property taxes).

Your anticipated holding period should inform the decision as well.  Time tends to work in homeowners’ favor.  Not only will rents most likely rise over time, but so will the equity in a home.

How about taxes on those potential gains?  Those are tax-free on the first $500,000 for married couples filing joint returns.

Finally, consider that renting tends to limit your responsibility for the property.  The homeowner picks up the tab for a new roof, driveway, and major plumbing issues.

Buy now?  Consider Tripp, Mathew McConaughey’s character in Failure to Launch, when he tells his friends, “We are men who still live at home. We're not here to apologize about who we are, how we do it, or who we live with. I'm looking around this table, hombres, and I see three winners.”  Perhaps.  Time will tell.

Federal taxpayers are provided a “standard deduction” of $25,900 for married couples filing jointly in the 2022 tax year. If itemized deductions do not exceed this figure, the deductions are lost.

Both mortgage interest and property taxes are considered “itemized deductions”.

Since the Trump tax changes in 2017, the combination of state and local taxes (SALT) is capped at $10,000. For many homeowners in California, their state income bill uses up most the cap, leaving the property taxes “unused”. The $1 million “starter home” used in the illustration would generate $12,000 of property taxes that would most likely not be deductible because of the cap on SALT. The first-year interest would be $39,732 but the $750,000 cap reduces the deduction to $37,500.

Excluding other itemized deductions (primarily charitable donations), the total deductions from the house would be $47,500 compared to the $25,900 standard deduction, or a difference of $21,600 in deductions. At a combined federal and state rate of approximately 41.3% (32% federal and 9.3% state), the potential annual income tax savings are $8,920, or $743 per month.