In the midst of working on the Déjà Vu album, Stephen Stills wrote “Carry On” to help him reconcile the inevitable break-up of his band. Hard to say if the EU will eventually reach such equanimity. However, Britain’s June 23rd referendum, decided 52-48%, in favor of exiting the European Union, means that we are about to find out. Today’s note will focus on the potential ramifications of Brexit.

We view this as more of a political than an economic event, but the two seem inextricably linked through the common thread of uncertainty.

“A new day, a new way” indeed, but which way? Article 50, agreed upon at The Treaty of Lisbon in 2007, spells out the procedure for withdrawing from the EU. Conspicuously, Britain has not initiated the process. Perhaps the inaction stems from the four million signatures already collected on a “bre-consideration” vote. (1) Respected market strategist David Rosenberg noted that though Greek voters rejected tough EU austerity measures, the Greek government later sidestepped the vote and they remain in the EU today. (2)

Divorce between two individuals can be contentious and complicated. Should Britain continue on the path toward separation they will need to negotiate not with a single entity, but 27 remaining EU countries. “Different states will have different interests. Germany will be concerned about minimizing the damage to the whole EU project, France will want to look after its farmers, and so on.” (3)

“Now witness the quickness with which
We get along”

While the political issues remain unsettled, the economic changes in Great Britain have been more evident.

“A college friend of mine from our days at Cambridge University told me that he would vote Leave despite being pro free trade all his life. Like others, the referendum had come down to a single emotional issue, that of Britain regaining sovereignty over its immigration policy. And this issue was so emotional and dominant for him that it totally crowded out a calm and comprehensive assessment of the multiplicity of factors in play.” (5)

The power of emotion. Can it continue to trump economic concerns going forward? What are the implications of diminished free trade? Most lists of the worst legislative actions in U.S. history include the Smoot-Hawley Act. Signed on June 17, 1930, the bill raised tariffs on thousands of imported goods.

“Of all the calls on Hoover not to sign the bill, perhaps the weightiest was a petition signed by 1,028 American economists. A dozen years later Frank Fetter, one of the organizers, recalled their unanimity. Economic faculties that within a few years were to be split on monetary policy, deficit finance, and the problem of big business, were practically at one in their belief that the Hawley-Smoot bill was an iniquitous piece of legislation.” (6) (7)

European retaliation with tariffs on U.S.-made goods eventually eroded global trade. Modern economists believe that Smoot-Hawley, though not the main cause of the Great Depression, certainly added to the depth.

Fortunately, we are not facing a Depression-like economy today or even a Lehman Brothers 2008 situation. Still, any diminution of free trade should be expected to result in lower global economic growth.

Impact on the United States

Au revoir to inflation. In a classic response to global economic stress, capital migrates from stocks to bonds and from suspect currencies into the U.S. dollar (liquid and transparent). The strong greenback cheapens imports for Americans, and puts further pressure on existing deflationary forces. With no inflation to fight, interest rates hikes will almost certainly be delayed, perhaps into 2018. The 10-Year Treasury Note, yielding 2.3% at the beginning of 2016 dipped below 1.5% by June 30th.

As denoted below, exports to Great Britain make up less than 4% of total U.S. trade, not particularly significant. (8) The rising U.S. dollar does increase the price of U.S. goods in the global markets. While the terms of trade with the U.K. may change, they are not going to stop producing goods or trading. 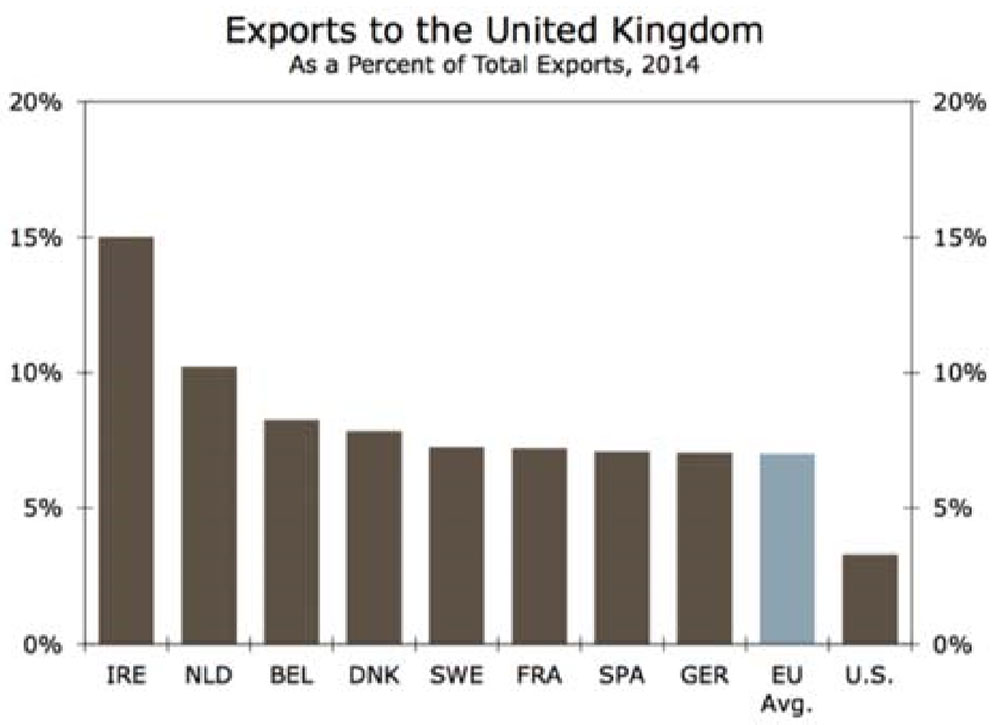 Still, the stronger U.S. dollar should make our exports more expensive (pressuring the earnings of global companies) while leaving the smaller U.S. stocks (not as dependent on exports) less vulnerable.

Perhaps the greatest threat to the U.S. economy stems from the high degree of uncertainty and the potential for business investment, hiring, credit markets and personal consumption to slow.

The flight to quality trade following Brexit pushed bond yields to previously unimaginable lows. The 10-Year Treasury Note (at 1.5% per year) would lose 8.75% in value if yields were to rise back to only 2.5%. Although we see yields staying depressed in the near-term, holding such long term bonds represents an untenable position.

Short-term traders and tacticians tend to examine large issues, handicap the results, and bet accordingly. While aware of pending potential influences on the markets, we rarely succumb to the temptation to leave some borders unprotected in order to amass troops onto a different border – not in light of the innate risk in making most predictions. Traders lined-up in advance of the Brexit vote, read the polls, bet big on a Remain vote, and lost big. (9)

Fundamentally, our views of the financial markets differ insignificantly from last quarter when we commented:

“The market trades for almost 18 times, up from the 14 level back in February. Bottom line: we expect stocks to be range-bound and volatile until the fog clears on both the economy and this unique election cycle.”

In the ensuing three months the stock market exhibited great volatility, but finished pretty much where it started. Interest rates dipped even lower. The dividend yield on the S & P 500 is approximately 1.5 times the rate available on 10-Year Treasury Notes. Yields on the European Index are nearly three times the yield on U.S. Treasury securities. (10) Either interest rates will rise (not likely in the near term) or stocks will continue to attract capital (despite not so cheap valuations). If anything, the fog has thickened.

While the lyrics above might capture the uncertainty of investors, we would describe the stock market today as:

We have no control over exogenous events and no appetite for making bold predictions with your money. The investment battlefield is littered with one-time heroes turned goats who were willing to leave borders unguarded. Instead, we will move forward through the fog. The next verse of “Carry On” tells us:

“The sky is clearing and the night has cried enough.
The sun, he come, the world to soften up.”

Using the disciplines around security selection and diversification that have served us well for decades:

“Rejoice, rejoice,
we have no choice
but to carry on.”