“Your love keeps lifting me higher
Than I’ve ever been lifted before
So keep it up
Quench my desire
And I’ll be at your side, forever more.”
- Jackie Wilson; 1967

Some 48 years after reaching number one on the R & B charts in 1967, Wilson’s hit song has made a revival. Oh, you might not hear it on the radio, but the stock market sings it every day to Janet Yellen at the Fed. “Quench my desire” – for endless easy money, “and I’ll be at your side” – well behaved.

Let’s examine these two characters and their relationship.

Originally created in 1913, the Fed earned early notoriety. Many economists deem a significant decrease in the money supply as THE major cause of the Great Depression that began in 1929. In addition, a classic study (1) puts the blame for the 1937-1938 recession squarely on the shoulders of the Fed, pointing to their quick tightening after a quick initial economic recovery.

Economic chaos in the 1970s; two oil shocks; a bill for the war in Vietnam, and Nixon’s un-tethering of the dollar from gold – and monetary policy ascends into the limelight. Congress amended the original Federal Reserve Act in 1977, to strengthen and clarify the mandate of the Fed:

Do Inflation and Employment Warrant Attention? 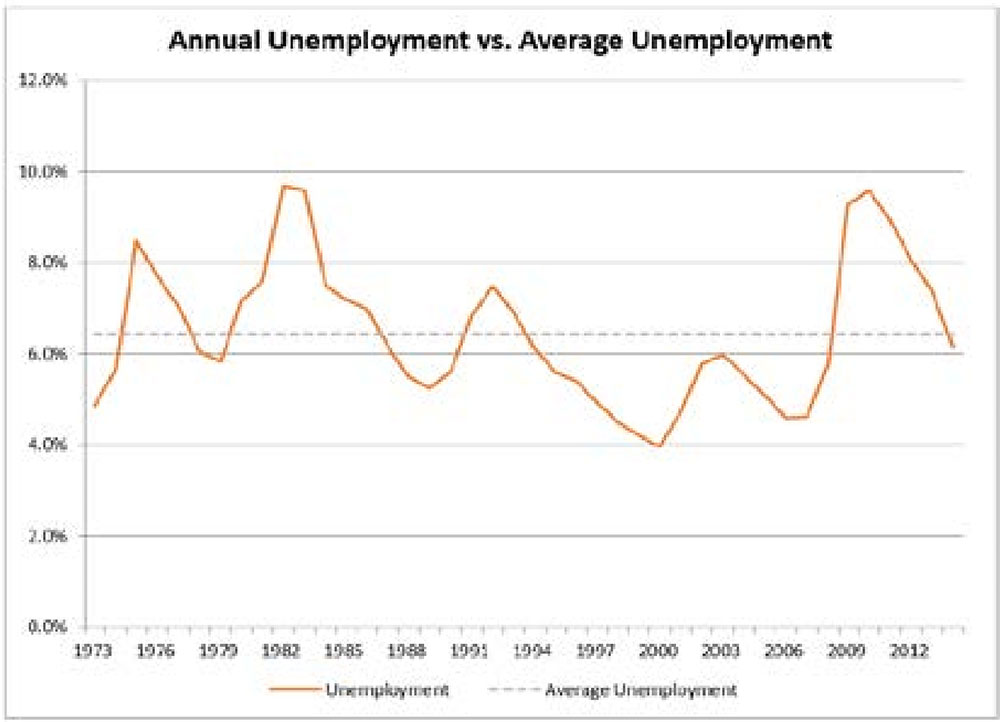 Price stability, measured by the Consumer Price Index, occasionally falters. The graph below shows the inflationary influence of the oil shocks in both 1973 and 1979 as well as the more recent deflationary scare in 2008. (3) 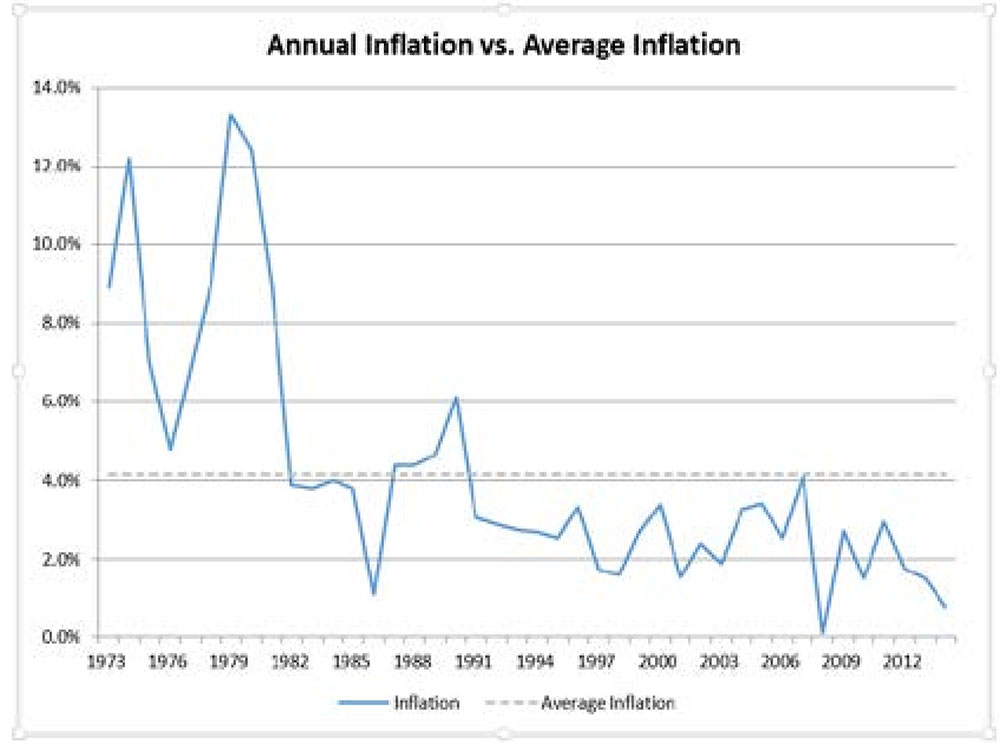 Both severe price swings and employment losses have transcended levels deemed acceptable by the American public, making it no surprise that Congress created the twin mandate for the Fed – to use monetary policy to promote both price stability and high levels of employment.

In a grueling 9-month period between May 2008 and February 2009, the market dropped nearly 50%. Now keep in mind that the Fed mandate says nothing about the stock market. However, this was not an ordinary bear market but a credit crisis straight out of the 1930s. Deflation became an imminent threat.

Financial markets, not just in the U.S., were in free fall and not many options existed for restoring liquidity and confidence. Fiscal actions could not act quickly enough. Who could serve as a credible global partner? Japan? Mired in a two-decade economic slump. Europe? Confronting the same economic headwinds without a single economic voice. China? Built and designed as an exporting machine.

Thus, Jackie Wilson (for our purposes, the voice of the stock market):

“Now once I was down hearted
Disappointment was my closest friend."

Fed actions were swift and broad. The Federal Funds rate represents one of the most powerful and transparent tools at the Fed’s disposal. Set at approximately 5% in 2007, the Fed pushed the rate down to 1.92% in 2008 and .16% by 2009. (4) Of course, it didn’t stop with rate decreases. The Fed bought back non-liquid securities from banks, made loans to foreign governments, bought mortgage backed securities in the open-market and beefed up both Commercial Paper markets and money markets. Their actions were not only effective, but critical.

San Francisco Fed President John C. Williams, in a speech looking back said “In late 2008, we were teetering on the edge of an abyss. If the panic had been left unchecked, we could well have seen an economic cataclysm as bad as the Great Depression, when 25% of the workforce was out of work. Why then didn’t we fall into that abyss in 2008 and 2009? The answer is that a financial collapse was not—I repeat, not—left unchecked. The Federal Reserve did what it was supposed to do.” (5)

“Now once I was down hearted
Disappointment was my closest friend.
But then you came and it soon departed.”

Mission accomplished? Sort of, but not completely. Four years into the recovery and up more than 200% from the February 2009 lows, the S & P 500 still threw a “Taper Tantrum” in 2013 when then Fed Chairman Bernanke hinted at lower levels of quantitative easing.

The market wants low interest rates and gushing liquidity. The Fed wants a stronger economy and inflation to rise to 2%.

Though the data fluctuates, the Fed seems to be gaining ground. The economy grew by more than 5% in the 3rd quarter of 2014 and 2.2% in the 4th quarter (6). Unemployment, originally targeted at 6.5% by the Fed, now hovers close to 5.5%. Only inflation targets elude Fed ideals of 2%. The March 17th release of the Fed minutes eliminated the word “patience”, suggesting that the Fed believes that the economy is moving closer to self-sufficiency.

The market’s initial response to signs of a stronger economy and potential for rising rates? Pouting. Returns on the S & P 500 were close to zero in the first quarter.

All signs point to rising interest rates. However, the Fed seems reluctant to raise rates soon in light of recent strength of the U.S. dollar relative to other currencies as seen in the graph below.

Problems created by the strong dollar include:

So the Fed, despite eliminating the word “patience”, has some incentive to keep rates suppressed a while longer. This explains comments made by Janet Yellen the last week in March: “The economy has been quite weak…in need of low interest rates…risk to the global economy…pays for the Fed to take out insurance against a return to exceptionally low inflation…” (8)

Will the Fed raise rates in June or will they wait until September? Will they raise by .25% each step or will they be more aggressive? Should we raise our trading alert to Orange?

We make no pretense about our -- or others (9) ability to predict the financial markets’ response to the timing or magnitude of interest rate increases. So, while we watch the interest rate saga unfold, our strategies remain unchanged. Your troops continue to occupy multiple borders rather than loading up on one front that requires a specific economic outcome for success. We have long kept the maturity of bonds on the shorter side in order to produce a natural hedge against rising interest rates.

We never gave up on international equities, even after years of lagging, and so far this year, those foreign stocks are the best performing asset class.

We didn’t overweight large cap U.S. stocks while they outperformed in the last several years. And, despite flat earnings estimates (10) and a not-so-cheap valuation of 17 times earnings, we have no intention of walking away from large cap U.S. stocks today. This commitment does not stem from the naivety implied in these final Jackie Wilson lyrics:

“And you know he (disappointment)
never showed his face again…”

…Only in love songs. Equity markets will continue to experience cycles. It’s hard to say whether pending changes in interest rates will prove to be the catalyst for the next turn. However, we think the interest rate story will exert zero influence on the sales of organic strawberries at Whole Foods and will not be a factor in the number of LeBron James Air Max shoes sold by Nike.

We will stick to high quality businesses and will eagerly embrace the inevitable arrival of the next cycle by using discipline to rebalance your portfolio into those asset classes that the markets disdain. This strategy has carried portfolios higher…and, higher, over time.