Such a nice message Mr. Rogers, but, things have changed quite a bit over the years.  What would Mr. Rogers say, half a century later, about a few key neighborhoods?

That makes sense, because they have jobs.  Unemployment rates have returned to pre-crisis levels. (2)

Consumers express their confidence by spending money, and that drives economic growth, as seen below. (3)  GDP grew at an impressive 3% clip for the most recently released data. (4)

Key West, Florida, Houston, Texas and San Juan, Puerto Rico.  Not pretty. These neighborhoods were battered by hurricanes Harvey, Irma, Jose and Maria.  Combined, these four storms have caused 103 deaths and $200 billion worth of damage, the second most destructive year in recorded history. (5) 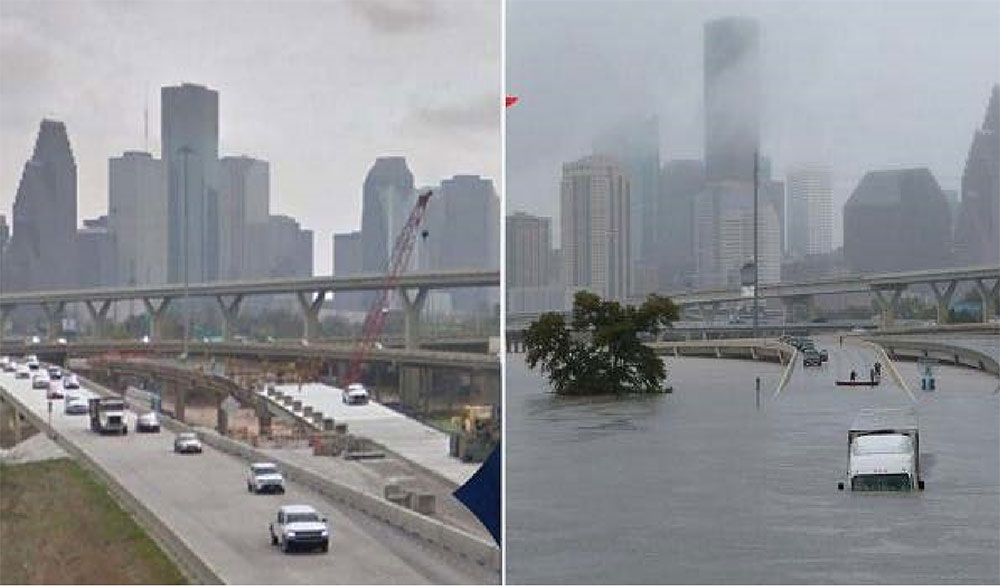 Texas:  2nd only to California as an economic force, and 10th largest economy in the world– right behind Brazil. (6)  Harvey closed roads and destroyed half a million cars and trucks.  The state enacted an emergency rise in property taxes to raise funds for needed repairs. (7)

U.S. oil refining capacity dropped by nearly 25% at the peak of the storm with 20 facilities closed near Beaumont, Port Arthur and Corpus Christi.  Thousands of Texans were forced out of work in the process. (8)

Florida:  The 5th biggest economy in the U.S., equal to Indonesia. Tourism, a $90 billion industry in Florida (9), will certainly take a hit.  In addition, “Florida farmers suffered 80 to 90 percent losses in parts of the state after Hurricane Irma flattened greenhouses, toppled trees and flooded pastures as it tore through the state.” (10)

Puerto Rico:  Desperate for funds to rebuild, but bankrupt with $74 billion of existing debt, Puerto Rico will be challenged accessing the capital markets. (11)   Fiscal projections for Puerto Rico already included the assumption of a declining population, but that might be accelerated by the emigration of families seeking to keep their children in school.  The Miami-Dade school district is preparing for an influx from Puerto Rico’s 350,000 students unable to return to their local schools.  (12)

Big Picture:  Disrupted oil supplies, closed roads, housing shortages, damaged crops, impaired tourism, municipal bond defaults and pervasive dislocation all lead economist Diane Swonk to conclude that U.S. economic growth will slow by 1% this quarter. (13)  The Butterfly Effect holds that the flutter of a butterfly’s wings in Brazil can impact the weather in Central Park. (14)  Applying that to the hurricanes…

The Federal Reserve Board had considered raising interest rates again in September, but refrained, partly attributable to the expected disruption to the economy from the hurricanes.  (15)

Washington’s current focus is tax reform.  Though subject to the meat grinding process that legislation requires, the key proposals include: (16)

However, we’re referring to the collective observations, conclusions and eventual decisions of investors.  What do they observe? The neighborhoods. What are their conclusions? That Main Street is doing great with high employment and rising economic growth.  That the Federal Reserve has enough confidence in the economy that it will raise interest rates later this year. That Congress aspires to enact tax law changes that would help corporations bring cash to the U.S. facilitating stock buybacks or dividend increases.  That U.S. corporate tax rates might soon be competitive on a global basis. How does Wall St. respond? By buying stocks. The S&P 500 is up double digits this year. The bigger neighborhood? Foreign stocks have outperformed U.S. stocks by a wide margin in 2017.

Though valuations remain elevated, earnings are expected to grow 8.1% this year and 11% in 2018. (17)   Bonds, despite providing some cash flow and serving to reduce portfolio volatility, do not offer enough yield to entice capital away from stocks.  Inflation, in flagrant defiance to the best efforts of the Federal Reserve Board, remains muted. Garden variety market corrections can occur at any time, but we find ourselves in general agreement with long time Wall St. veteran and market strategist Byron Wein’s recent comments about the probability of something more dramatic: “Investors are optimistic but not euphoric, inventories are not excessive, unemployment is declining rather than rising, leading indicators are making new highs and inflation is modest. Accordingly, we could be several years away from the next recession or bear market.” (18)

Would You Be Mine?

Well, a good neighbor, as the saying goes, treats one as thyself.

We have structured WCF to avoid most of the conflicts inherent in the investment world and we are 100% transparent about your performance and our fees.  Your decision to stay a client shouldn’t be based on our television commercials or the size of our skyscrapers in New York City, but on the unfettered weighing of what you get and how much you pay to for it.

By contrast, you might recall that the P.S. on last quarter’s Market Commentary celebrated the proposal of new regulations by the Department of Labor (The Fiduciary Rule) that required Wall St. brokers to disclose conflicts and put their clients’ interest first.  We expressed frustration that it required government intervention to force individuals to act in other’s best interests, but, the results were more important. Turns out our celebration was a bit premature.

The Department of Labor has proposed a delay in implementing these rules, for a period of 18 months while it “reviews”.  On Wednesday, September 27th, Rep. Ann Wagner of Missouri introduced a bill to simply kill the rule. (19)  The official WCF response:  You have lit a fire in our belly to work harder to reach a much broader audience and enlighten them about their choices.

We have always allowed our aligned interest and the quality of work and service to speak for itself.  We now feel compelled to shine the light outward; it might even be our civic duty.

We work hard to be good neighbors and remember some of pearls of wisdom passed down from Mr. Rogers:  “It’s easy to say, ‘It’s not my child, not my community, not my world, not my problem. Then there are those who see the need and respond.  I consider these people my heroes.” (20)