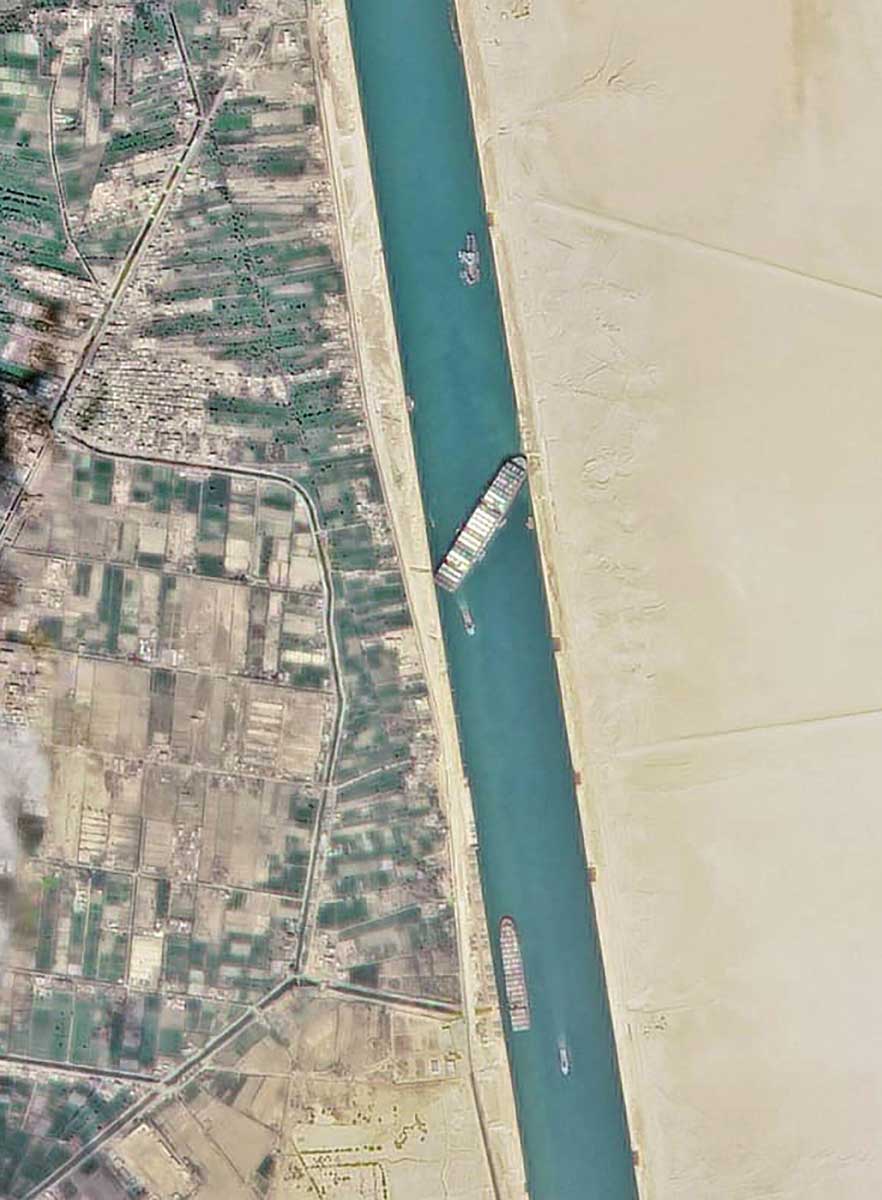 With one quarter down, the story for 2021 seems clear and on script.  The economy appears to be roaring;  GDP growth projections have expanded to 5.5% for the year. (1)  As discussed in our report last quarter, this would be the strongest economic performance for any full calendar year since 1984.  The financial markets all adjusted accordingly with the following highlights:

In the spirit of the Santa Barbara Film Festival that is in full bloom, we can dig beyond the plot and consider the subtext.

The stock market is huge.  Ignoring small cap stocks, the value of the S & P 500 alone is approximately $32 trillion.  By way of comparison, this is larger than the total annual GDP of China, Japan, Germany, United Kingdom, India, and France…combined. (5)

Didn’t Newton teach us that big things in motion tend to stay in motion?

Well, it might be hard to fathom but, the container ship Ever Given (pictured above), suggests otherwise.  It meets the criteria for size (at 1,300 feet in length, it is a tad longer than four football fields; its 220,000 tons equals the weight of 75,862 Chevy Suburbans) and was gliding through the Suez Canal when it came to a grinding halt.

According to reports, “there are more than 100 ships of similar size plying the world’s water- ways.” (6) The cargo containers are being stacked too high.  But, introduce one environmental element, wind, and presto!  You have the recipe for—sorry, we could not resist—a perfect storm.

At day six, the combination of dredging and pulling from tugboats facilitated the forward facing of the bow, eliciting the expression of relief from one of the salvage operators, “She’s free.” (7)

Why do the ship operators take the risk of over stacking?  They do so simply because they can transport more goods with limited capacity. Leverage and speculation both represent the financial variations of  “over stacking” and the rationale clearly aligns—investors need higher returns than those available in today’s financial markets to pay the bills.  The graph below shows the returns available on 10-Year Treasury Bonds (in purple) compared to general price inflation (the Consumer Price Index). (8) 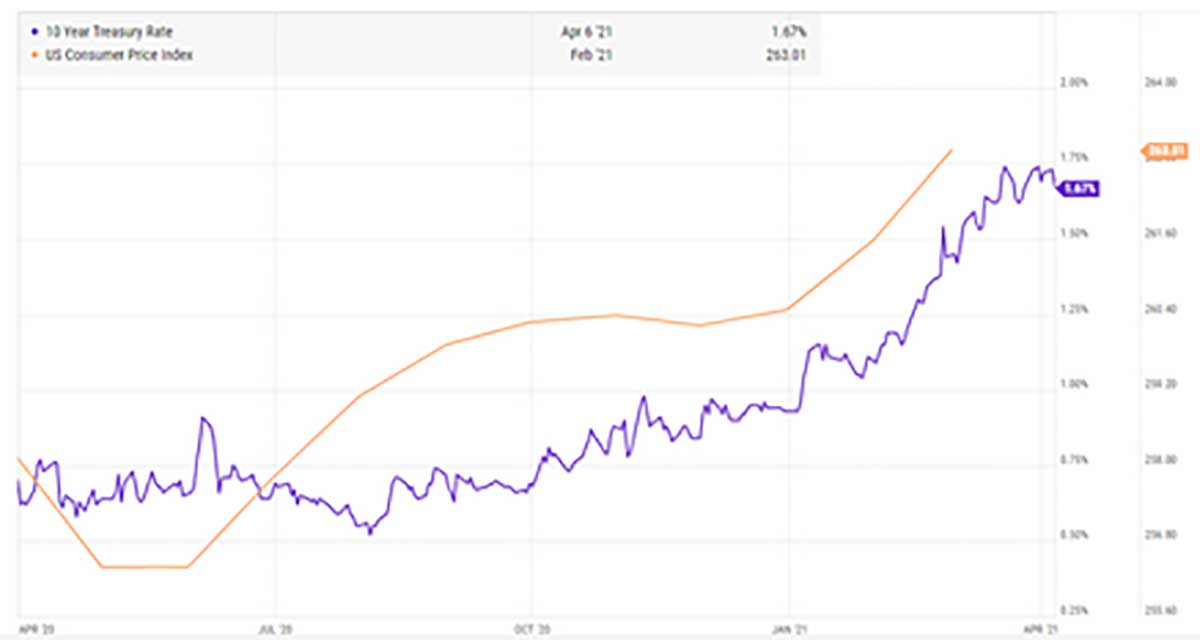 Could the financial markets be just as vulnerable?  Leverage entails the use of debt to buy an asset.  The buyer/borrower puts up a down payment and the asset typically serves as collateral for the loan.  If the buyer/borrower makes the payments or the value of the asset stays steady, no problem.  If the asset drops in price, the collateral can become insufficient.  Consider 2008 when the housing bubble burst and the collateral for those mortgages melted away.  Banks and subprime loan investors took the brunt of the damage, partially mitigated by taxpayers.  When an investor obtains a margin loan, the stocks being purchased provide collateral for the loan.  However, if those stocks drop in price, lender controls dictate a request for additional capital:  a margin call for more cash.  Any failure to act on behalf of the borrower will prompt the lender to exercise its right to simply sell the stock and avoid further losses.

We refer to leverage as “financial MSG,” the flavor enhancer, capable of making good results great but, symmetrically, making bad results worse and, sometimes fatal.  In a world where U.S. Treasury Bonds typically pay less than 2% per year and stock prices reflect abundant optimism, some view leverage as one way to get ahead.

Archegos was an aggressive investment fund operating under the disguise of a “family office” to circumvent regulations. They had $10 billion under management, not enough to present a blip on Wall Street radar.  They borrowed money to buy stocks, not an unusual activity, controlling as much as $8 worth of stock for every $1 they owned.  It turns out that they borrowed money from everyone on the street…at the same time…including Goldman Sachs, Morgan Stanley, and Credit Suisse.  As the value of some of their holdings dropped, their inability to meet margin calls were met with liquidation.  Goldman and Morgan moved quickly, selling concentrated positions in names such as Viacom/CBS, Discovery Communications, and Baidu.  The rapid responses from Goldman and Morgan preserved their capital but cratered the prices of Archegos’ largest holdings.  In a classic game of musical chairs, it was Credit Suisse left standing with the bill.  According to reports, the giant bank will take a $4.7 billion loss on their portion of the loan. (9) The entire market capitalization of the giant bank was only $25.5 billion at the end of the quarter, so the loss evaporated approximately 20% of the entire bank.  Credit Suisse is an international powerhouse and Archegos, a previously unknown, tiny player.  If the Ever Given is “one of 100 such sized container ships”, what does that imply for the capacity of the “100 [unregulated] family offices that hold over $150 billion in assets.” (10)

Total margin debt, as seen in the graph below, is at an all-time high. (11)

Leverage can be measured and adjusted but remains just one of many approaches toward speculation, the other prevalent form of  “over stacking.”  Nonfungible tokens (NFTs) utilize the blockchain technology that makes Bitcoin possible.  An image can be created with an assurance that it cannot be duplicated, resulting in a unique item, such as an original painting, that can be bought and sold.  However, they are NOT tangible, they are digital only.  In February, the image of a flying cat sold for $500,000.  Soon after, Jack Dorsey, the founder of Twitter, sold the first ever tweet for $2.5 million.  Beeple, a digital artist, sold an NFT, through Christies for $69 million and commented, “I actually do think there will be a bubble to be quite honest and I think we could be in that bubble right now.” (12)  You think?

GameStop, a retailer focused on consumer electronics, has struggled for the past 10 years, with a total market capitalization of less than $300 million last summer.  Users of Reddit, a website ripe for rumor-spreading, managed to create a buying frenzy in the stock to take the value up to $24 billion in February.  The stock increased 75 times in a period of weeks.  Revenues in the past year have been cut by 15% and the company reported a net loss of $215 million in the most recent quarter.  To the best of our knowledge, they are not working on medical miracles or eternal life batteries and there were no fundamentals to support the price movement.

Absent the winds, the ship operators would likely have escaped the blockage of the Suez Canal and would have been viewed as smart, efficient, and productive for their risk taking.  What are those exogenous factors, the winds, imperiling the stock market?

Ironically, the biggest threat to Wall Street today comes from the success on Main Street.  How much growth can be absorbed before inflationary pressures build?  Will the Fed continue their efforts to push interest rates to artificially low levels if inflation emerges, despite the risk of debasing the value of the U.S. dollar?  Or would the Fed err toward restraint and allow interest rates to rise?  The Treasury Bond market just experienced its worst quarter since 1980 with “safe” 20-Year Treasury Notes dropping nearly 14% for the period. (13) Essentially, how do we “normalize” after 13 years of Frankenstein level experiments in monetary policy?  Do the inflation and interest rate pendulums elegantly settle back into equilibrium or, does one or the other overshoot?

We are tasked with keeping your financial journey on track and have no appetite for unplanned stops or the use of financial tugboats.  Any rational investment strategy must start by acknowledging an inability to control the winds.  We need to be efficient and productive on your behalf, while avoiding “over stacking.”

We have been on record, for years now, about avoiding interest risk rate with your bond portfolio by keeping maturities shorter than the benchmark.  We suffered a little stigma of the “boy who cries wolf” when interest rate increases failed to materialize and, in the face of Covid-19, dropped.

However, as mentioned at the beginning of this note, rates have spiked due to massive fiscal and monetary stimulus, coupled with the vaccination rollout.  We have no intention of dropping bonds as an asset class but will remain defensively postured until we see signs of stabilization.

Interest rates also influence the attraction of certain stocks over others.  Growth stocks consist primarily of technology, health care, and consumer companies.  Because of their general insensitivity to the economic cycle, growth stocks typically shine when GDP is struggling.  Growth stocks, which look longer into the future for results, are worth more mathematically when interest rates are low.  Higher rates result in a more significant opportunity cost.  Covid-19 initially brought the trifecta of a stumbling economy, lower interest rates, and a sudden acceleration of technology shifts to facilitate remote working.  The S & P 500 consists of two sub-groups: growth and value.  Over long time periods, value has outperformed growth.  In 2020, the S & P 500 Growth index returned more than 30% while the S & P Value index returned a mere 1.21%, with these two indexes differing “by an even wider margin than during the dot-com bubble year of 1999.” (14)  Our primary focus in stock selection is quality, a factor that incorporates consistency, stability, predictability, and profitability.  We seek stock price appreciation but not with companies prone to deep cycles, and we maintain a price (value) discipline.  Although the process kept us away from stocks like Zoom and Netflix that soared in 2020, it kept us tethered to sleepier names such as Applied Materials and Walgreen’s, examples of big winners in Q1.

We maintain a strategic (as opposed to tactical) position in international equities due to the diversification benefits they provide, not because of anything we see in a crystal ball.  In the first quarter of 2021, International equities outperformed the S & P 500. (15)  The currency diversification should provide us with some mitigation of potential losses should the value of the U.S. dollar falter under the weight of the ever-increasing debt load.

We expect rotation in the equity markets as the momentum of last year’s winners fade into the reality of today’s better economic backdrop and sturdier interest rates.  Periods marked by such changes are typically characterized by volatility.  We will do everything in our power to keep the winds to your back so that you can enjoy the sail.  We do not want to declare your freedom; we want to help maintain it.