Alternative Minimum Tax (AMT): How Did We Get Here?

In 1969 there was a tremendous amount of uproar about 155 people who earned at least $200,000 (the equivalent of about $1.2 million today) and did not pay a penny in income taxes – completely legally. With the Vietnam war raging, the government needed cash, and this group was an easy target considering the marginal tax bracket for a person earning that much at that time was 70%!

In 1969 the Tax Reform Act was signed into law to close what many viewed as major loopholes. This work was completed with the Tax Reform Act of 1986, which ushered in much of our current system. Thus, the Alternative Minimum Tax was born in an attempt to ensure that high-income earners paid at least some tax on their income.

While well-intended, there were some major flaws with the policy, most notably that the income brackets did not increase with inflation. (Perhaps it was a feature, not a bug!) In 1969 almost no one paid AMT, but by 2017 roughly 5,000,000 Americans owed AMT. Reversing that trend, the Tax Cut and Jobs act of 2017 made structural changes that drastically cut the number of people who owe under this system to about 200,000.

There are essentially two separate income tax systems in the US (Regular Tax and AMT), and we’re required to pay the higher of the two. Both start with gross income. We are allowed deductions from gross income to arrive at “taxable” income and the deductions for each system are slightly different. Today, we will focus on the difference in what’s considered income. 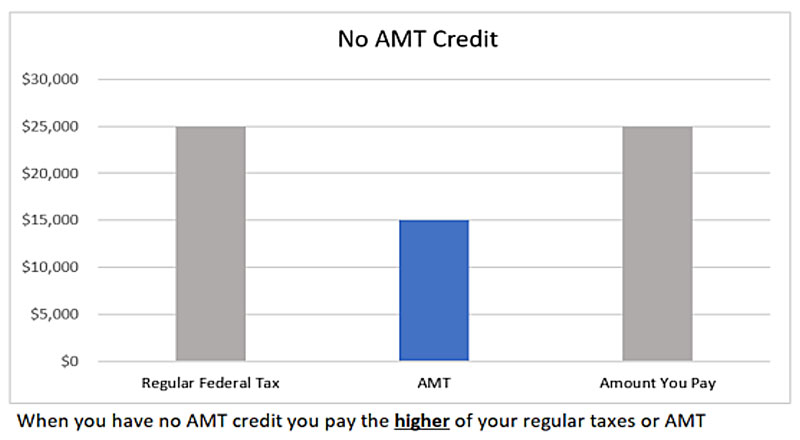 The most pertinent of those is the gain on exercised Incentive Stock Options (ISOs).

Usually when ISOs are exercised, there is a gain between the current fair market value of the stock and the option’s exercise price. This gain – called the “bargain element” – does not impact regular taxes but can significantly increase AMT taxable income and thus AMT. For early employees at successful companies, the bargain element can be substantial and makes it difficult to exercise ISOs at all.

However, there is a silver lining. Unlike the other AMT preference items, the government issues a credit for AMT paid for exercising stock options. In theory this means that any taxes paid because of exercising ISOs will be returned in future years, thereby reducing future tax bills.

How these tax credits come back to your bank account is the subject of our next article, Alternative Minimum Tax (AMT) Credit.