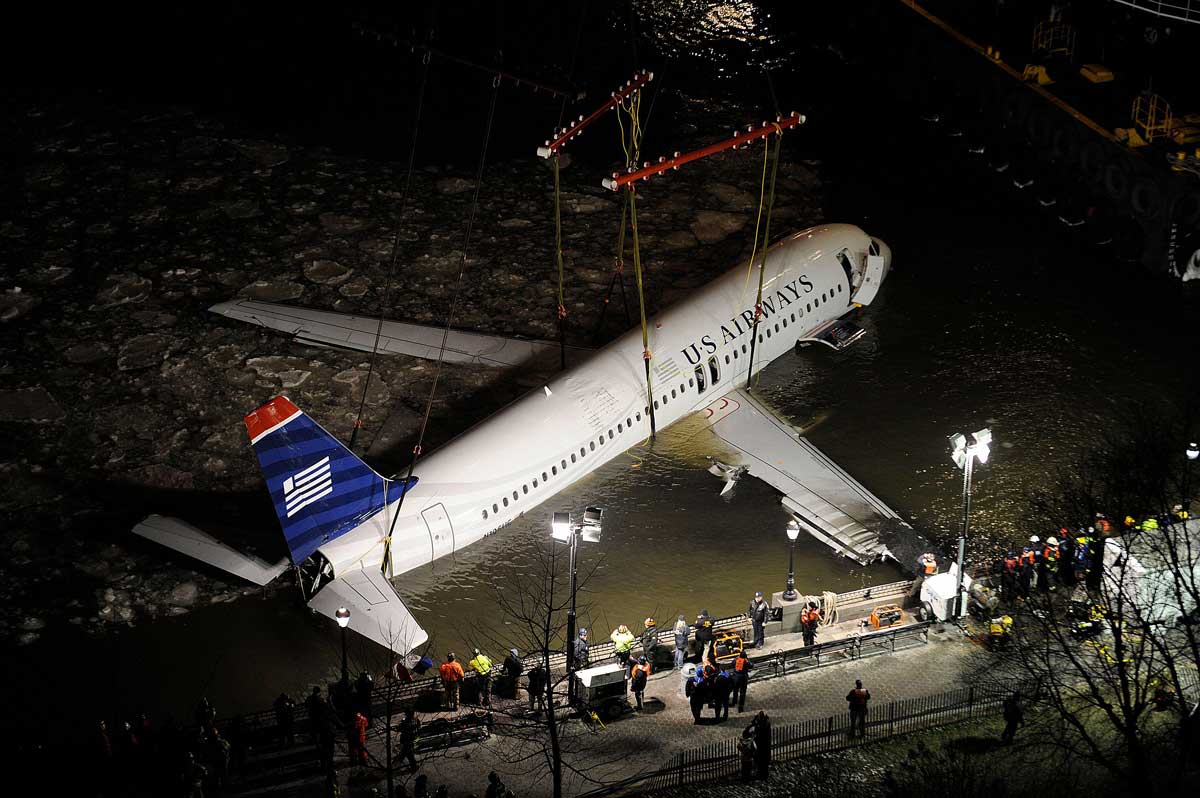 “We’re gonna be in the Hudson.”

No, they didn’t land in their original destination of Charlotte, North Carolina. But if you ask any of the 155 passengers if they were satisfied with their journey, the response would be resoundingly positive.  There had not been many good alternatives for U.S. Airways Flight 1549 that afternoon.

Shortly after take-off from New York’s LaGuardia, the Airbus ran into a flock of birds resulting in total engine failure.  Cool Captain Sully realized the plane lacked the power to return to any airport and informed the passengers they were heading for a water landing.  The rest of the story is the stuff used to make movies.

Captain Sully retired in 2010, but perhaps he’d consider playing the role of hero once more—this time assisting the Federal Reserve as they guide an economy with few landing options.

What is our current location and trajectory?  How did we get here and what pathways remain viable?

How will the financial markets respond to pilot maneuvers?

When Covid grounded the global economy to stall speed, both Fiscal and Monetary throttles were thrust up to maximum levels.  Though effective in regaining flying altitude, the unintended consequence has been exceeding “absolute ceiling”, an aeronautical term meaning, “we can’t maintain this speed.”  Demand for both goods and services exceed supply, resulting in inflationary pressure.

The genesis of today’s inflation can be traced to March 22, 2018, when the U.S. imposed $50 billion of trade sanctions on China.  As discussed in our October 2021 report, “U.S. importers absorbed more than 90% of additional costs resulting from the 20% U.S. tariff on Chinese goods.” (3)  Covid exacerbated the problem by disrupting supply chains and disrupting an economy highly dependent on global trade.  Despite these problems, the long-term projection for inflation in the fall of 2021 was a benign 2.38%. (4)

Today, those same metrics imply inflation going forward at 2.79% (5).  In the spring of 2020 with the world in lockdown, inflation expectations bottomed at .50%, causing the Fed to publicly proclaim a target of 2% inflation.  Why are we now closer to 3.0%?

First, the Fed learns from past mistakes.  After climbing out of the Great Depression in the early 1930s, the economy began to recover by mid-decade, and seemed to have “normalized” by 1936.  In response, the Fed began restricting the money supply.  Unfortunately, between May of 1937 and June of 1938, the U.S. economy suffered the third worst downturn of the 20th century. (6)  GDP fell by 10% and unemployment reached 20%.  Federal Reserve Chairman, Jerome Powell, has no appetite for a rerun of that show while under his watch.  Better to err on the side of growth and keep Americans employed.

Second, the unexpected exogenous shock (“birds in the engine” moment) came when Russia invaded Ukraine.  Consider the following price changes in oil and wheat, both produced by Ukraine and Russia but not necessarily available in the markets. (7)

In October Neel Kashkari, President of the Federal Reserve Bank of Minneapolis shared his view that inflation was “transitory” and that he didn’t expect to see interest rates rise until 2024. (8)  Now, the Fed has no choice but to act.

During the official Fed meeting in March, Chairman Powell reiterated his determination to stopping inflation and announced his “approach.”  The Fed plans to raise interest rates at each of the next six meetings and is willing to move in .50% increments instead of the previously executed .25%.  He added his intention to reduce the Fed balance sheet starting in May. (9)

The bond market: Bond market participants expect the Federal Funds Rate to rise to 2.8% by 2023. (10)  Though certainly elevated from the 0% target that has been in place since Covid-19, this rate is still low by historical standards. (11)  Of greater concern is the steepness of the ascent necessary to get rates up that high in only nine months.

The stock market:  The S&P 500 dropped 12.26% to start 2022 before bottoming on March 8.  Despite the volatility, the stock market has been mostly positive for the past three weeks.  Some attribution goes to the strong energy sector.  However, one could reasonably interpret the good performance to an underlying faith that the Fed will be willing to ease up once the economy demonstrates sufficient slowing.

Can the Fed pull off a “water landing”?

The optimists lean on the following:

The gloomier views stem from:

Financial markets feast on certainty but, there’s not much available.  The economy isn’t the only fuzzy issue.  Geopolitics, inflation, consumer behavior, and earnings remain opaque.  Despite these challenges, the S&P 500 (4549; 4/5) trades for almost 20 times projected earnings ($233). (21)  As you can see in chart below, the 20X seen at the far right of the graph (red line) has only been exceeded by a brief period in the late 1990s, going back to 1978. (22) 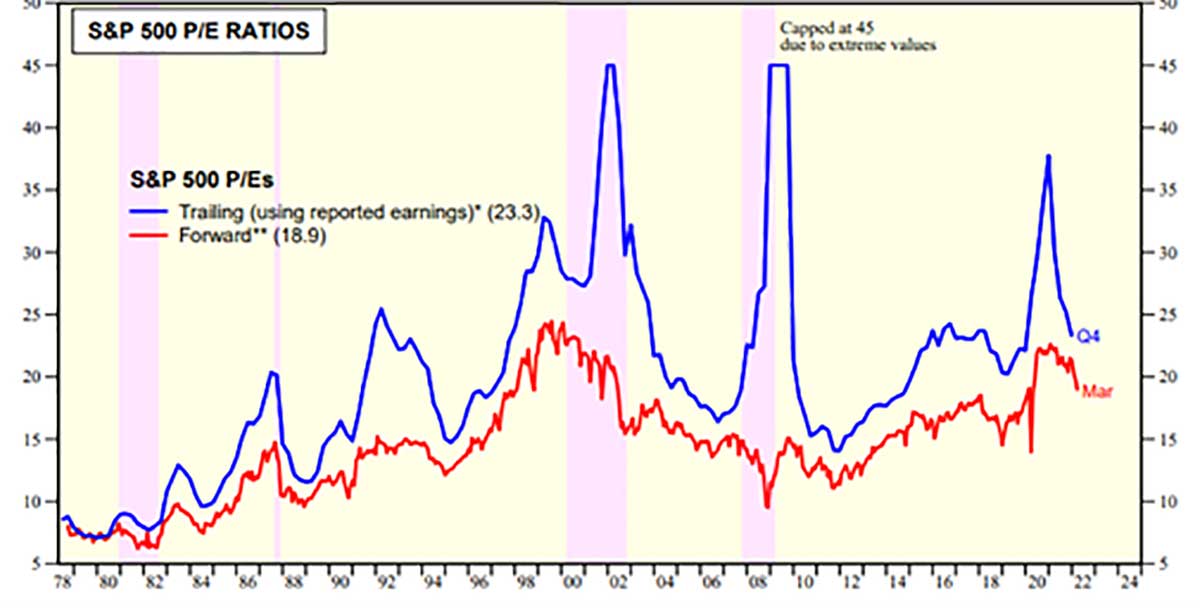 WCF has taken two approaches toward this market.  First, we have modestly reduced our cyclical exposure by selling a few positions that depend on a strong economy.  Second, we have moved toward defensive positions in the areas of food and storage facilities, typically less sensitive to the economy with dividend yields that are higher than the overall market.

We will soon add exposure to multi-family housing investments, which appear to be doing well within the rising millennial population as well as within the overall market of increasing housing prices and mortgage rates.

When pilots lose visibility, they rely on Visual Flight Rules (VFR), rules that guide a pilot through difficult conditions.  We may not have a clear view of where the economy or the war in Ukraine are heading, but we do have a set of rules that should help to maintain your flight plan.