Are we there yet?

Well, that depends on how one defines “there.” The most immediate “there” could mean the end of the bear market for equities. Related, though more aligned with “the glass is half full” viewpoint, “there” could reflect an optimal time to invest. Finally, we must address the question, “Does it matter?”

The S&P 500 is down 23.87% through three quarters this year while the tech-heavy NASDAQ has suffered 32.49%. Small cap and foreign stocks are both down more than 25%, all easily passing the 20% down threshold necessary to satisfy the technical definition of a bear market. Though uncomfortable, bear markets are part of the landscape, with 28 such periods since 1928, approximately one every four years. 1

According to market historian Ned Davis, “The average non-recession bear lasts about seven months and has declined 25%. Conversely, the average recession bear has lasted about a year and declined a mean of 35%.” 2

Absent a recession, we may have run the course of a typical bear market in terms of magnitude and duration [nine months and 24%]. Should we brace for another three months and 10% lower stock market prices? That depends on one’s economic crystal ball. Many of the metrics typically used to predict economic cycles seem less reliable today because of the dislocations associated with COVID-19 and the Russian invasion of Ukraine. The Conference Board, tasked with identifying our position through economic cycles recently reported, “While we do not believe the U.S. economy is currently in recession – due to strength in a number of sectors and the extremely tight labor market – we expect that a broad downturn in the economy is on the way.” 3  Whether we will slip into an official recession remains the subject of debate, but a more prolonged stock market downturn seems like a distinct possibility.

One of two catalysts typically serve to bring bear markets to a close. First, the Federal Reserve, dually mandated with fostering price stability and full employment, comes to the rescue of the markets by easing money conditions. It is hardly a coincidence that the S&P 500 dropped almost 10% since Fed Chair Jerome Powell spoke at the Jackson Hole meeting of central bankers saying, “While rate increases would bring down inflation, they will also bring some pain to households and businesses. These are the unfortunate costs of reducing inflation. But a failure to restore price stability would mean far greater pain.” 4 That rhetoric suggests the Fed cares more about their credibility in the fight against inflation than any concern about the stock market - at least for now.

Bear markets can also end from exhaustion.  At some point, the valuation of stocks reaches an irresistible valuation and sellers disappear.  Are we there?

If the discussion were about gold or Bitcoin, it would be difficult to calibrate price because of the lack of relevant metrics tied to those assets. Stocks, conversely, represent fractional interests in companies that comply with Generally Accepted Accounting Principles to measure and disclose sales, earnings, cash flow, and often dividends.

Current estimates for the S&P 500 earnings are $243 for 2023. 5  The operative word, “estimates,” should not be taken lightly.  We remain mired in a fluid environment with uncertain labor markets and still dislocated supply chains. However, the S&P 500 closed the quarter at 3585, suggesting a price to earnings ratio of 14.75.  As the chart below indicates, the current valuation of the market is in the neighborhood of bottoms that occurred in 2002, 2015, 2018, and 2020.  The bottom green rectangle points to even lower valuations that occurred in 2008-2009 (The Great Recession) and 2011, a year in which the U.S. received a credit downgrade for the first time in history while unable to agree on a debt ceiling. 5

The argument for deploying capital is simple and supportable by data:

Bonds tend to get little attention in these reports because of the complementary role they play relative to equities. Bonds are supposed to buffer the volatility of stocks and produce some cash flow.  We liken them to cream in coffee or Merlot grapes in famous Bordeaux wines, never getting the headlines but obvious when things go wrong.  The Bloomberg Aggregate Bond Index is down 14.61% year to date, the worst performance in history.  The good news: 10-Year Treasury Bonds, which yielded less than 1.0% in 2020, currently offer a yield of 3.83%. 6

Bond yields only have meaning when viewed relative to inflation.  We have leaned on the chart following because of the predictive nature of the data. (7) Longer term inflation expectations peaked in April (circle on the following graph) and now stand at their lowest point in the past 12 months [2.15%]. Pay particular attention to the rectangle at the far right of the graph that tracks inflation expectations since the day Fed Chair Powell spoke at Jackson Hole. Energy (down 30% from the recent peak) and real estate (7% mortgages are tamping down demand for houses) both weigh heavily in the actual calculation of the Consumer Price Index. 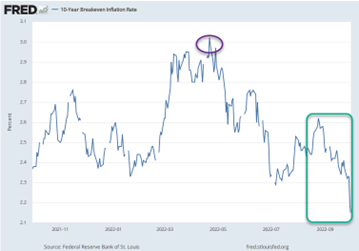 A 10-Year Treasury Bond, yielding 3.83%, and featuring virtually zero risk of default, provides the highest returns relative to inflation expectations in the past 10 years. 7

Finally, stocks may or may not be at an absolute bottom, depending on a myriad of variables including the fight against inflation, the ability to avoid a recession, and investor psychology.  What we can say, with confidence, is that 14.75 times earnings does represent a “reasonable” entry point for the S&P 500, and a figure lower than most in the recent 10 years.

Our mission centers on the elimination of financial related stress. We lean on data to help create a narrative designed to restore faith in the financial markets during these regular, but uncomfortable, down cycles.  We are not, in any way, trivializing the emotional impact of lower market values. However, there is a clinical, pure analytic viewpoint that begs the question:  Does it matter whether we “Are we there yet?”

Seasonality is reality for the financial markets. These are not elevators that go straight up. Despite invoking the sensations of a roller coaster, markets do tend to go up in the long run.

The key to long-term success lies in the execution of thoughtful financial planning. The financial markets “there” can be exceedingly evasive. However, the cash needs of families, especially those with adequate insurance in place, can generally be forecast in advance. Thus, we tend to emphasize liquidity, the holding of cash, and the avoidance of exposing big ticket expenses to the whims of the short-term markets.  This year’s challenging markets are but one season and unless someone needs to completely cash out of their investments, mostly, a precursor for the next season.

We will conclude by repeating the chart we provided last quarter that shows some of the worst bear markets in history and the performance of the stock market in the following five years. 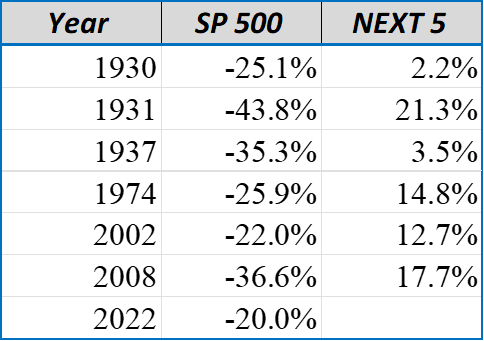 For the long-term investor, today seems more conducive for planting than for reaping.