“The end justifies the means.”

Machiavelli wrote The Prince during the Renaissance – a transition period out of the Middle Ages. Like his fellow artists and writers, he helped frame the integration of philosophy and political rule. He supported the thesis, often abused, that immoral behavior could be accepted if the results were sufficiently noble.

In 2022, stocks dropped nearly 20% – the fourth worst calendar year performance since 1973. Bonds recorded their worst year ever – down 13.06%.1 Both suffered from a dramatic spike in interest rates orchestrated by the Federal Reserve Board.

Despite the cause and effect, in December, Chair of the Federal Reserve, Jerome Powell, insisted the fight against inflation has not been won and more rate hikes are coming.2 Does the slaying of inflation necessitate additional rate hikes? Does this objective qualify as a sufficiently noble cause, to accept the anticipated economic damage associated with higher interest rates? What are the investment implications?

The .50% hike in rates instituted in December was the seventh of the year – 4.25% cumulatively and reaching absolute levels last seen in 2008.3 These hikes represent a strong dose of medicine to stymie inflation. In addition, according to the International Monetary Fund, the aggressive rate hikes will not be fully felt for about one year.4 Could patience be the better course? After all, inflationary pressures are easing as evidenced by:

Moreover, the Fed’s own models indicate that the Consumer Price Index (CPI) is dropping rapidly and expected to dip to the 2.0% target by next year.8 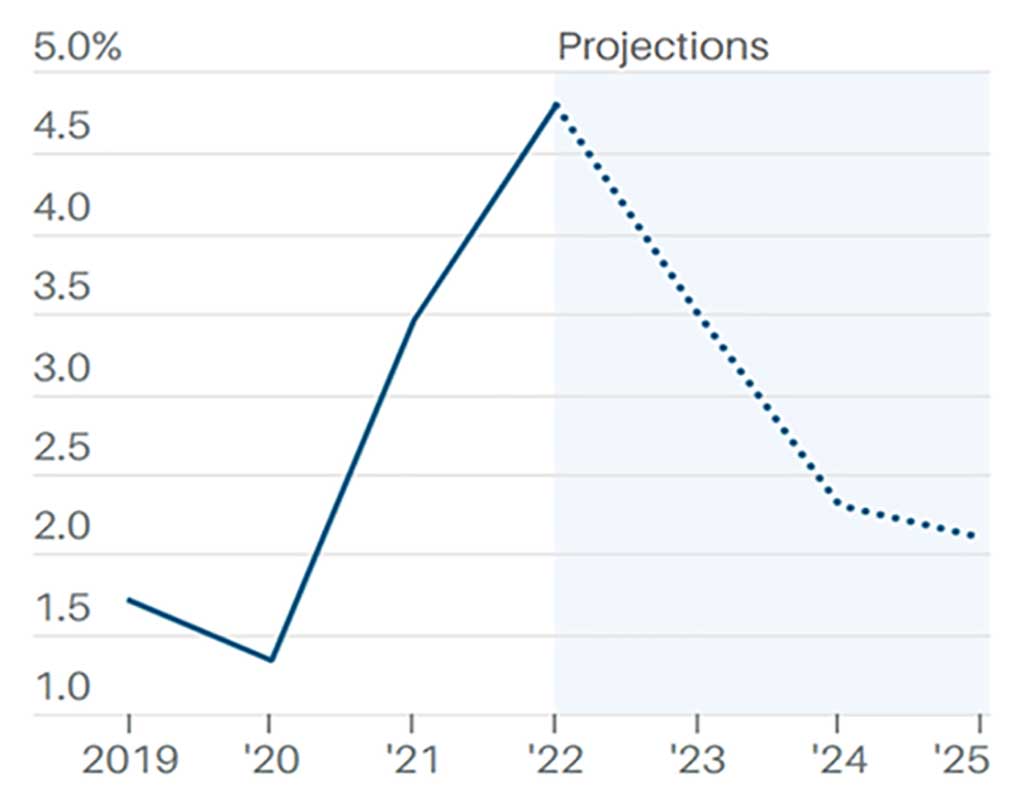 Not only is inflation heading down, but the economy is at risk for a recession as demonstrated in the chart below.9 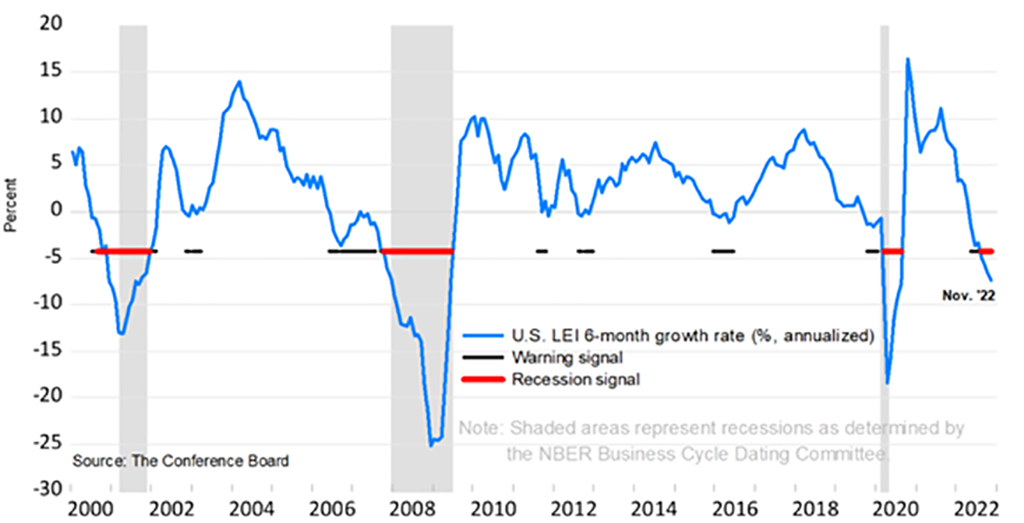 As depicted in the chart below, when short-term interest rates exceed longer term rates, the yield curve is inverted.12 Recessions, as indicated by the gray vertical bars, tend to follow inversions.

Although the economy did stumble in Q2, GDP increased by a sturdy 3.2% in Q3.13 Perhaps more relevant is the latest unemployment reading at 3.7%, near the lowest figure for the last several decades.14 In addition, the Fed’s internal models conclude the economy will grow in 2023, as opposed to contract.15

The Fed models project that unemployment, despite a flattish economy, might rise to 4.5% in 2023. Although moving in the wrong direction, that figure would be low by historical standards.

Finally, the perilous nature of inflation cannot be underestimated. Rising prices, especially for essential items such as food, shelter, and transportation, erode the standard of living, especially for those with lesser means or living on fixed incomes. Rapidly rising prices eventually alter consumer expectations and perpetuate the inflationary cycle.

In October of 2021, we dedicated our Market Commentary to the “Just One Thing” concept featured in the movie City Slickers. For the financial markets, that one thing was the Fed. Today, we can identify a few points about the Fed with confidence.

The Fed has indicated their intention to raise rates when they meet on February 1st. The increase should add friction to an economy that is already slowing. Over the past two weeks though, the 2-Year Treasury yield has dropped lower than the federal funds rate – “an event that very often heralds a pause in rate hikes, or an end to hikes.”16

Contextually, keep in mind that the current 10-year inflation projection implied in the bond market is 2.31% per year. Inflation was much higher in the 1980s and 1990s and yet, the stock market did just fine. Volcker had help. Then President Reagan, cut income taxes to stimulate the economy and the budget deficit vanished along with the Berlin Wall, facilitating dramatic cuts in defense spending.

We could load up on food and healthcare stocks in anticipation of a recession, but the stock market is a forward-looking mechanism and stocks in those sectors have already been bid up in price. We could shun industrial and retail stocks that are more sensitive to the economic cycle, but they are already discounted in price. When (not if) the economy/stock market rebounds, they will lead the way.

We do believe that longer term interest rates may have already peaked and offer returns above the forecast level of inflation. After mitigating interest rate risk for the past several years, we are starting to increase the duration of our bond portfolios. Last quarter we stated that the S&P 500, then trading at 14.75x projected earnings, appeared to present a reasonable entry point for investors. We were not the only observers to reach that conclusion. Despite a tough year, the S&P 500 went up 7.5% in Q4.

Ray Dalio, the highly respected hedge fund manager recently said, “He who lives by the crystal ball will eat shattered glass.” We couldn’t agree more and forgo the temptation of weaving in and out of markets based on economic tealeaves. The cost of “betting” on economic predictions that fail to materialize can be high. We will maintain a broad level of diversification across all market sectors or, as we like to say metaphorically, “We will continue to leave some troops on every border.”