No argument.  We lost the wind in May and suffered a sharp stock market correction in the third quarter.  China, a major source of headwinds, will be the focus of today’s note including:

We will conclude by commenting on the future direction for those winds and our navigational plans.

Having a taste of freedom, long repressed citizens wanted more but bore the brunt of the authoritarian crackdown in Tiananmen Square in 1989.  The ugly reminder of one-party rule, resulted in a severe loss of government credibility. In fact, 700,000 citizens in Hong Kong, or more than 10% of the entire population, secured foreign passports in advance of the handover (1997).  China could not afford to lose the economic engine that Hong Kong had become after 150 years under British rule.  Instead, they implemented a program called, “one country, two systems” and gradually embraced broader economic freedom throughout the country.  Appreciating this tight wire act for the government, one that fuels urban capitalism while severely restricting other basic freedoms, is critical in understanding today’s socio-economic dynamics.

In 1991 China had a Gross Domestic Product of $381 billion, roughly the same as Spain had that year, and about the same size as Columbia’s GDP today.  In the ensuing 24 years through persistent reforms, privatization and massive capital inflows, China grew its economy by 10% per year. Their $10 trillion economy now stands second only to the U.S and dwarfs that of number three Japan (2).  China is now the largest single creditor to the U.S.  What does this staggering growth mean for China and for the rest of the world?

Implications Inside of China

In one quarter of a century China:

This rapid economic success, at least for now, serves to calm the social tempest that quietly threatens authoritative rule.  However, Chinese leaders fully appreciate the need to keep the economic miracle running. Per-capital GDP in China ranks 80th in the world, around 10% of the U.S (3), so there is plenty of room for improvement.  Their grand experiment with state run “free markets” depends on economic growth and jobs.

Implications Outside of China

Though vast, we want to concentrate on only three aspects of China’s impact on the rest of the world including:

By exploiting incredibly cheap labor (and yes, disregard for worker’s conditions, the environment and international law) China established itself as a premier exporting machine.  If Western companies wanted to join the party, they understood the entrance fee: bring your capital and bring your technology. Cheap exports pressured global pricing downward and forced companies around the world to reduce expenses to compete – mostly by cutting jobs and substituting labor saving technology.

The urbanization of China, with 15 cities exceeding a population of 10 million people, required massive building as evidenced in the chart below (4). 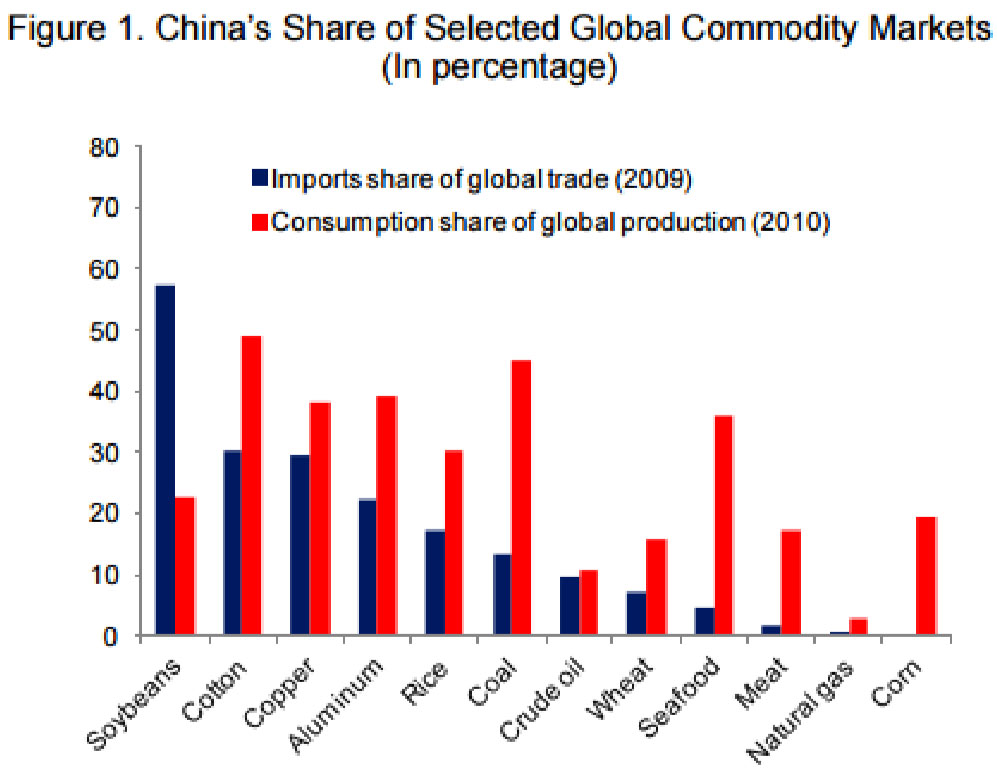 The commodities surge led to rising economies for many emerging market countries endowed with natural resources such as Brazil and Australia.

When asked by the developed nations for help, in the aftermath of the economic hurricane in 2008, the Chinese government stuck to their party line by saying, “Its greatest contributions will be to keep China growing.”(5)  After spending half a trillion dollars to stimulate their economy with infrastructure projects; growth resumed and did serve a constructive role in the global economic recovery.

The economic engine known as China --the one that drove emerging market economies, lowered consumer prices and helped the global economy recover from 2008 – is now sputtering.  The Chinese stock market has dropped 40% from recent highs, their manufacturing index continues to fall and growth estimates have moved from historical 7-10% to something closer to 2%.

China’s response to the economic malaise:  Surprise the world and devalue the Yuan on August 11th.

While China caught everyone off guard with the currency action, the subsequent turmoil in equity markets was neither unusual nor unexpected.  The chart below dates back to June and shows that we just experienced the third longest period in history between stock market corrections. (6) 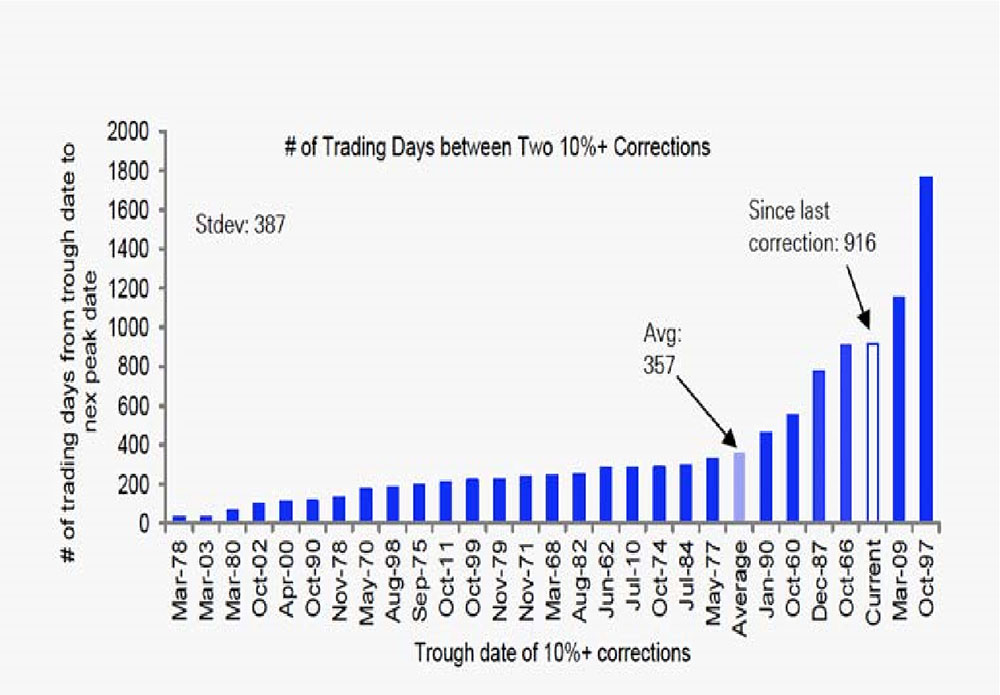 A more granular view can be seen in the chart below.  Notice the uneven damage across various financial markets between recent highs through the lows reached on September 8, 2015 (7): 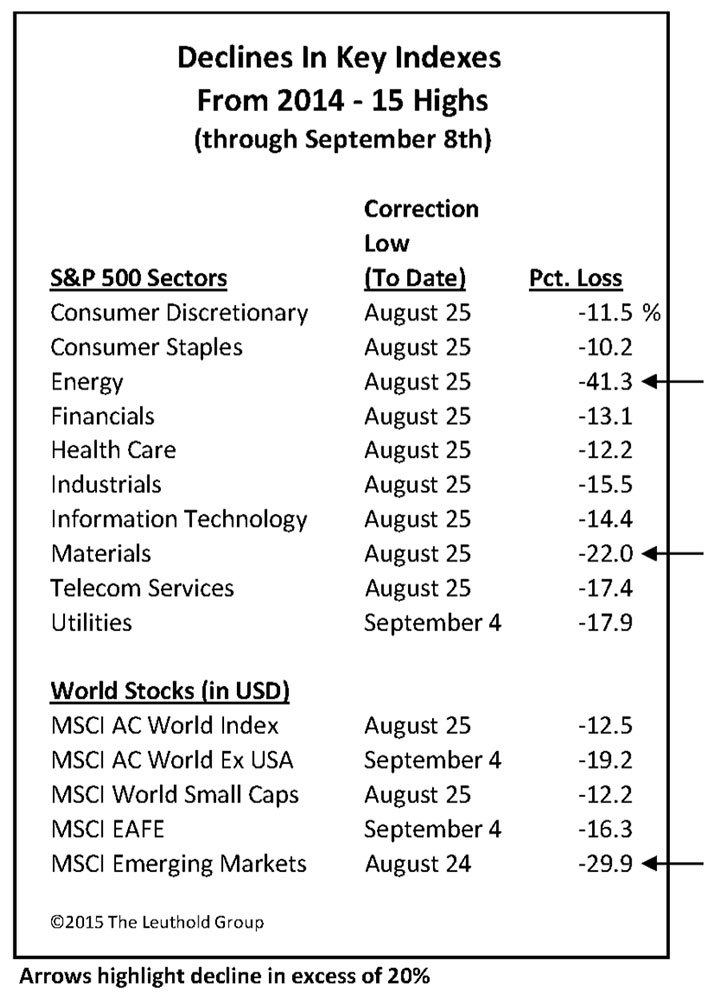 Pessimists argue, no, China cannot continue to use reserves to support the economy.  No, China cannot afford the risk of unleashing social unrest. Their only lever remains currency devaluation.  The August move was the tip of the iceberg and the currency will continue to move lower; making it more challenging for China to pay down its’ estimated $1 trillion in dollar denominated debt (8).  This will further cheapen export prices, but will inflict pain on competing emerging markets and lead to a currency “race to the bottom”.  Lower prices will trigger deflationary forces that lower sales, profits, jobs and then demand… rinse and repeat through a financial vortex.

The problems in China will be contained.  David Kostin, chief U.S. equity strategist at Goldman Sachs recently wrote, “The Middle Kingdom’s struggles will not derail the U.S. economic expansion. Approximately 2% of the revenue of S&P 500 constituents is generated in China, and U.S. exports account for just 13% of GDP, with less than 1% going to China. We expect the U.S. economy will avoid contagion and continue to expand.” (9)

Sometimes warm air masses collide with cold air masses and, together with the rotating earth, cause the fronts to spiral around one another.  The optimists and pessimists represent metaphoric proxies for air masses (or perhaps it’s the other way around) and the 200-300 point daily swings in the stock market represent swings in their battle.

Should we succumb to the pessimist camp and stop sailing?  Franklin D. Roosevelt once said: “To reach a port, we must sail - sail, not tie at anchor - sail, not drift.” (10) Sail we shall.  The alternative would be to move to all cash (throw out the anchor), hope the storm subsides and hope that we could precisely get back into the market on time.  Are we Intrepid?  Hardly.  Then what gives us the confidence amidst the rough seas?

First, your vessel was never designed for speed, but for being sea worthy. 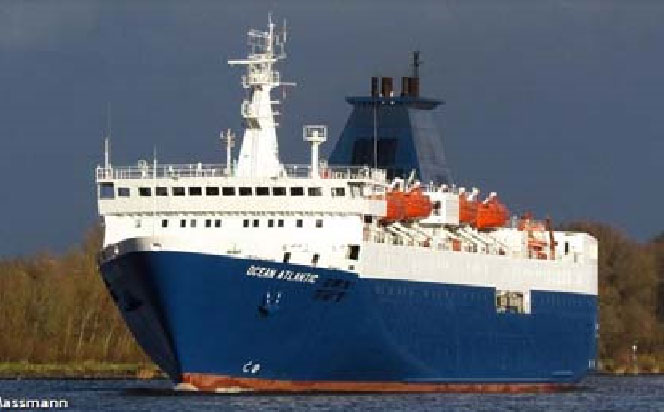 Cash and bonds have proven to be ballasts in this latest storm.  We own bonds that tend to be backed by the full faith and credit of a taxing authority (such as the state of California) or are backed by the U.S. government (marketable certificates of deposit).  We own no individual junk bonds, nor energy related bonds. A critical factor in our stock selection for the past eight years has been balance sheet strength. We have chosen “all weather” stocks that can not only survive rough seas, but thrive.  We have no exposure to U.S. banks or to Chinese domiciled companies.

Second, the view from up high, the Lighthouse if you will, supports strength in the U.S. economy, as David Kostin references above.  Unemployment rates hover near 5.3%, interest rates remain incredibly low and highly depressed oil prices represent a bonus for consumers.  Despite challenges in the energy sector, earnings estimates on the S & P 500, at $132, represent a multiple of less than 15 times. In other words, stocks appear to be trading near historical averages, while bond yields provide scant competition.

Finally, consider the picture below, taken at the Kennedy Museum in Boston

And our “adjustment” comes in the form of rebalancing your portfolio toward those asset classes that have been lagging in performance.  We added to one small cap name in August and you should expect to see increased equity purchases with any continued market weakness.

The reason we choose to sail into the wind stems from our study of its nature.  We know from history that the wind will one day change direction, and we want to be well-positioned when it is once again at our back.

And at the end of the day, investing means nothing in a vacuum.  The reason we sail, the reason we accept the occasional rough seas and the reason we move forward, is because you have staked us with the responsibility of helping you to achieve your financial goals. Thank you for your continued confidence.